During the 438-km expedition spread over nine days, the cyclists will pedal through Himalayan terrain to test their endurance and skill.

“The rally started from Shimla’s ridge and will pass through Shimla and Kullu districts before culminating in Shimla Oct 6,” said Mohit Sood, president of the Himalayan Adventure Sports and Tourism Promotion Association (HASTPA), the club organising the event..

He said participants included 13 foreign bikers from Nepal, Britain, the Netherlands, the US, Belgium, Canada and Uzbekistan. 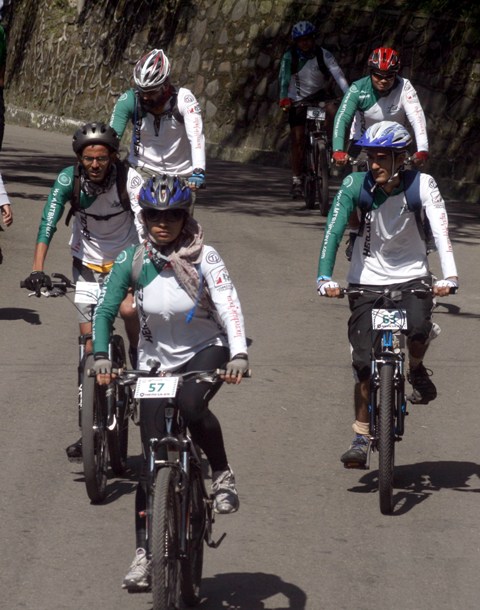 This time, the length of the route has been reduced to 438 km from last year’s 503 km. But the event organisers said this time the route was more treacherous.

The average altitude of the trail following the ridge is 2,450 metre. The Jalori Pass (at 3,223 metres) in Kullu district is the toughest and highest point in the rally. On an average, a cyclist will pedal about 70 km daily.

The competitive section will have about 300 km.

Sood said the most exciting route is the 18-km long mule track from the picturesque village of Kullu Sarahan, about 170 km from here, at the base of the 3,277-metre Bashleo Pass, to Tarala. The entire route is through a mountain ridge.

“This was one of the oldest forest mule path, once a favourite route of the British. A rest house made by the British is at Tarala,” he said.

Nepal biker Nirjala Tamrakar Wright scored her third win on the roll in the women’s category in 2011. In the men’s category, another Nepal biker Ajay Pandit Chhetri won the expedition for the second time.

This time, both are not participating in the event.

The Hercules MTB is billed as the third-toughest mountain biking event in the world after the Trans-Alps Challenge (Europe) and Trans-Rockies (Canada).