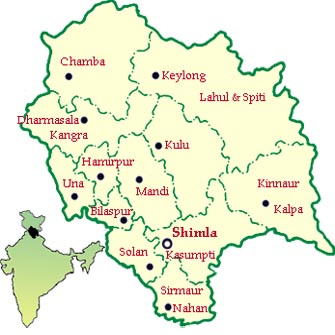 The recent announcement by Chief Minister of Himachal Pradesh of a “Green Budget“, in the next fiscal year, has once again shifted the focus on this tiny Himalayan state’s initiatives in preservation of environment at International Level.

With the historic last year’s agreement between World Bank and Himachal Pradesh government ,of world’s largest and India’s first CDM(Clean Development mechanism) project ,under which the WB will buy Carbon Credits from the new forests being developed on degraded lands under a watershed management program has opened a new arena for Hydro Power Projects in Himachal Pradesh.

The World Bank project is estimated to fetch HP government, carbon revenue of at least Rs 20 crore for the first crediting period of 20 years.

As a result of urbanization, we have been emitting Carbon or gases which result in warming of the globe. Few years ago debate started on how to reduce the emission of harmful gases that contributes to the greenhouse effect that causes global warming. So, in 1997 various countries came together and signed an agreement named ‘Kyoto Protocol’.

The Kyoto Protocol has created a mechanism under which about 34 countries that have been emitting more Carbon and other gases (gases like ozone, carbondioxide, methane, nitrous oxide, and even water vapors) have voluntarily decided that they will bring down the level of Carbon they are emitting to the levels of early 1990’s.

A company has two ways to reduce emissions. Either it can reduce the GHG (greenhouse gases) by adopting new technologies or improving upon the existing technologies to attain the new norms for emission of gases. Or, it can tie up with developing nations and help them set up new technologies that are eco-friendly, thereby helping developing country or its companies ‘earn’ credits.

India, China and some other Asian countries have an advantage because they are still developing countries. Any Company, factory or farm owner in India can get linked to UNFCCC (United Nations framework convention on climate change) and know the ‘standard’ level of carbon emission allowed for its outfit or activity.

These credits are bought over by companies of developed countries-mostly Europeans-because the US has not signed Kyoto Protocol.
Why Hydro Power Companies are Top Contenders?

Since hydroelectric dams do not burn fossil- fuels, they do not directly produce Carbon Dioxide. While some CO2 is produced during manufacture & construction of the project, this is a tiny fraction of the operating emissions of equivalent fossil- fuel electricity generation. As per scientific studies, hydroelectricity produces the least amount of greenhouse gases and externality of any energy source. In the studies, Coming in second place was Wind energy, third Nuclear energy and fourth was Solar Photovoltaic.

Since, Himachal Pradesh has a huge potential of estimated 21,000 Megawatts of Hydro Power generation therefore, all the Hydro Companies entering HP will be the biggest beneficiary of this ‘carbon moolah rain’!!