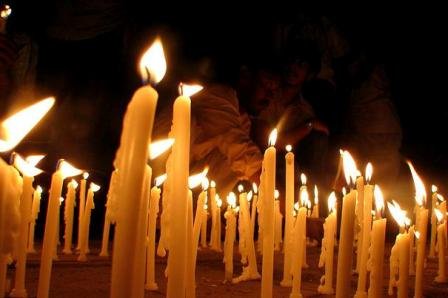 Srinagar: The Social Organizations of the Valley today gathered in Press Colony to oppose juvenile detentions in the valley after police had arrested minor boys in connection with violence on the occasion of Eid.

A silent candle light protest was organized to draw attention of the State towards the long pending implementation of the Juvenile Justice (Child protection and Security) Act, which attracted people from all walks of Society in large numbers- Students, Social Activists, and Civil Society all got together to appeal for an immediate implementation of the Act.

“While separate systems exist in all states to try and punish juveniles in ways distinct from adults, children in J&K are still waiting. Sending juveniles to adult prisons is not only detrimental to society, it is also immoral. The detention of juveniles should be the last resort, for the shortest appropriate period of time and that all children must be separated from adults. The continued sentencing and detention of juveniles regardless of their age has a detrimental impact on juveniles. Justice is everybody’s right. Children’s justice is to be ensured by adults because they cannot lobby for themselves,” said Kalpana Tikku, Chairperson Arnimaal.

Another participant, Khaiur-Nissa said that there is an immediate need to bring strong laws that provide protection and security to Juveniles.

She added that one should not forget that a juvenile delinquent could be, nothing more than a poor child caught red-handed in an impulsive and immature act of which he knows not the degree of seriousness, and he or she deserves an empathic treatment.

The protest was organized by Arnimaal, a voluntary Organization working with children and on child rights.