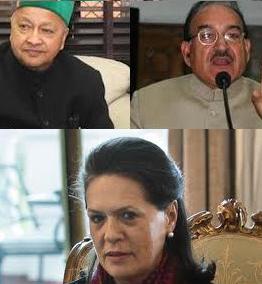 Sources close to Virbhadra Singh, a former Himchal Pradesh chief minister, said that he met the Congress president twice during the day and added that the meetings were “positive”.

They said Virbhadra Singh also met some Nationalist Congress Party leaders over the past few days but had no plans to quit the Congress.

Congress sources said that the party leadership was positively inclined towards some of his demands, including appointment of a working president in the state unit.

They said Gangu Ram Musafir, a loyalist of Virbhadra Singh, could be appointed to the post.

Congress in-charge of Himachal Pradesh Birender Singh, however, downplayed the issue of Virbhadra Singh calling his supporters to Delhi.

He told that state party leaders were here to meet President Pranab Mukherjee and submit a “charge sheet” against the Bharatiya Janata Party government in the state.