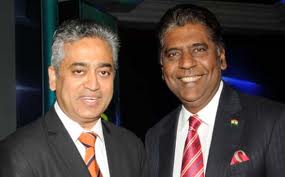 New Delhi: Legendary tennis player Vijay Amritraj makes his debut as a talk show host with “Dimensions”. A first-of-its-kind, the show will feature global icons. Excited about his new journey, Amritraj says the show is a face to reality.

“It gives me immense pleasure to be the host of ‘Dimensions’. The show will surely uncover the facts and lives of many eminent personalities. It is not just a regular talk show, it’s a face to reality,” Amritraj said in a statement.

To go on air on CNN-IBN, the show will feature sporting legends to business tycoons and from supermodels to Hollywood A-listers.

Shot completely outside India, the first episode of the show, which starts Aug 18, will see actress Sharon Stone as the first guest.

Sharon Stone will talk about her early days and hardships as an actor, her movie “Basic Instinct”, experiences of working with co-actor Arnold Schwarzenegger and more.