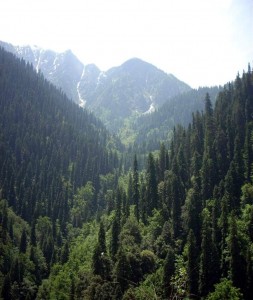 Dharmshala: Forests in Himachal cover an area of about 21, 325 sq kilometers. i.e. about 38.3 pecent of the total area of the state. The state government is aiming to provide green cover to 50% of the total area. Earlier forests were the main source of income of the state. Now the stress has shifted from exploitation to conservation.

‘Himachal government has set a target to plant 2,00,00,000 plants in the monsoon under vanamahotsava”, said Forest Minister Khimi Ram at Jawalamukhi  45 kms from Dharamsala on Friday. The minister said that during the past 4 years the state government has planted 6,40,00,000 plants of different varieties in 20,000 hectares of land in the state. Varieties include timber, fruit and medicinal plants. He said that the state has succeeded in raring sandal wood plants in the Dehra sub division of the Kangra district, which shall benefit the people monetarily.

Taking to media the minister said “Under Pipal-Bargad Yojna , 8000 plants were plated in 4446 villages of the state last year and the scheme shall continue.” Further, he added that 148 forest water bodies were constructed and another 100 are in the pipe line to boost plantation.

Felling of trees and the sale of timber is now conducted by the State Forest Corporation. The Forest Department mostly concerns itself with plantation and conservation of forests. A World Bank assisted Social Forestry Project has also been launched. This project aims at raising fuel, fodder and small timber species to meet the basic necessities of the people so that they do not resort to depletion of forests for fulfilling their private needs. An Enforcement Organization has been set up to check the illegal felling of trees and smuggling of timber. An integrated water shed department project for Shivaliks is under preparation. Another project to grow trees in the barren ‘Kandi’ area has been undertaken with the help of the World Bank. Steps have also been taken to intensify preservation, management of forests and hunting has been banned.