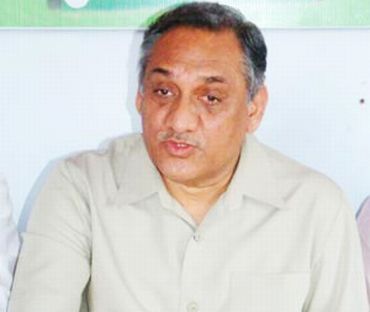 Dehra Dun: Uttarakhand chief minister Vijay Bahuguna is finding the going getting tough for him. This perhaps could explain why he is on a trip to Delhi at the slightest pretext.

Obviously, if party sources are to be believed, it is to inform the high command of the problems that are being raised by the party legislators and getting directions on how best to circumvent them.

In fact, things have reached a stage that to draw the attention of the national media and also the party high command; his detractors in the Congress have started resorting to staging their demonstrations in Delhi.

Vice chairman of the Uttarakhand Forest Corporation and MLA from Khanpur Kunwar Pranav Singh Chauhan , recently held a dharna at Jantar Mantar to draw the attention of the party high command.

He had earlier created a piquant situation for the chief minister and the state sports minister Dinesh Aggarwal, when he dared the latter to run a 100 metre dash. Though Aggarwal did not think it proper to respond to the challenge, but Champion had sent a message to the chief minister and in the bargain also raised a number of issues that had been bothering him, including not being consulted in transfers.

Though Champion later told newspersons in Delhi that he had nothing in particular against Aggarwal or for that matter the chief minister of Uttarakhand, but he wanted to draw the attention of the party high command, of all political parties that sportsmen, should be made sports ministers, so that they can do something for the upliftment of not only sports, but sportsmen also.

Then it is MLA from Almora, Manoj Tewari who has started his indefinite hunger strike pressing for adequate posting of doctors in the hospitals of his constituency. With the prevailing shortage of doctors, despite the recent hike in their emoluments, and few willing to climb to the mountainous areas of the state, it seems highly doubtful whether the demand will be met.

But what is now becoming a matter of concern for the chief minister is the fact that even the BJP legislators have now decided to make their presence felt. Arvind Pandey, of the BJP is now disgruntled, as the chief minister did not meet him despite having allocated time for him.

Though this was not on purpose, but the fact that Bahuguna was preoccupied with the arrival of union commerce minister Anand Sharma.

However, this has not assuaged the ruffled feathers of Pandey, who has now threatened to stage a demonstration against the handing over of the government sugar mill in Udhamsingh Nagar under the PPP mode. There is already resentment amongst the mill workers against this proposed move of the state government, which could snowball into a major controversy.

However, supporters of the chief minister claim that some bitter pills have to be swallowed if some important decisions in the interest of the state and its people are to be taken. “If things have to be improved, some strong decisions have to be taken and implemented in earnest, this is what is being done and so the resentment is but natural and will be taken in stride”, they claimed.