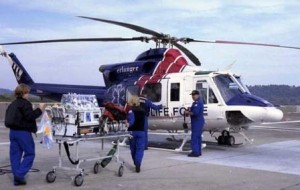 Dehra Dun: A project to undertake an air ambulance service in the state, which was initially shown a lot of interest by the previous BJP government in Uttarakhand has been forgotten. Even the proposal for the project, which made headlines over two years, when initially proposed, back seems to have been lost in the babudom, at least for the time being.

During the tenure of Ramesh Pokhriyal ‘Nishank’ as chief minister of this small mountain state the proposal for an air ambulance service was initially mooted. The company operating the ambulance service being provided in the state under 108 also showed great enthusiasm in the air ambulance service. Trips were even made to foreign countries to study, which aircraft (helicopters) would be appropriate to use in Uttarakhand.

Sources in the state government said that initially there was great enthusiasm for starting the service, as popular opinion was that it would even give a boost to tourism activities, specially adventure tourism in the state. A number of meetings and discussions were held and it appeared that there was all sincerity in starting the service, but then with Pokhriyal giving way to Khanduri as chief minister and now with a Congress government, the proposal seems to have been put on the back burner, they claimed.

They pointed out when it comes to tourism in Uttarakhand, there are two important sections. One of course is the char dham yatra or pilgrimage to the four renowned shrines of the state, Badrinath, Kedarnath, Yamnotri and Gangotri and the other is trekking and mountaineering, and for both of them an air ambulance service would have been a God send.

Sources said that during the monsoons every year, thousands of pilgrims coming to the shrines are stranded along the national highways in the upper reached because of landslide and landslips. “These stranded pilgrims could be evacuated to safety immediately, rather they spending hours in isolation without food and water till rescue and relief teams reached them”, they maintained.

Likewise they said that even mountaineering and trekking are not without their share of danger. “It is a well known fact that quite a few trekkers, including foreigners, have been lost, some even losing their lives while trekking in the glaciers of the state, and air ambulance service could have proved a boon to them. Moreover when trekkers and mountaineers become aware of such service available, more teams will come which will improve tourism prospects”, they felt.

They were also of the view that even during natural calamities, like the one recently witnessed in Uttarkashi, providing timely relief to the disaster hit would be a lot more easier with the air ambulance service.