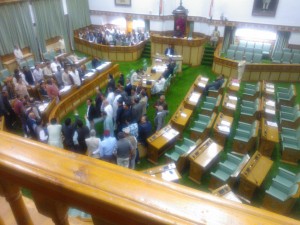 Shimla: The Himachal Vidhan Sabha rejected by a No Confidence motion by voice vote, the first one moved by opposition Congress moved against the BJP government today, but not before heated arguments were witnessed and complete pandemonium prevailed in the house with congress members storming the well and later staging a walkout.

Earlier replying to an 8 hour debate CM Prem Kumar Dhumal, when pointing out about how Jaiprakash Associates was granted permission to set up a cement plant in violations of state land and environment rules by the previous Congress government, was interrupted by opposition members by mentioning that the High Court had implicated the BJP government over it.

The altercation that followed led to heated arguments and slogan shouting from both sides.

With each side trying to out shout each other, they trooped into the well and pandemonium prevailed in the house late into the night. Speaker attempts to restore order in the house fell on deaf ears.

On the government not agreeing to register a case against those implicated in the contentious cement plant judgment, a demand put up by Vidya Stokes, all congress members staged a walked out.

Tearing into the opposition’s arguments, CM Dhumal said that not just the independent agencies but central government agencies had conferred 68 awards on the state for its good governance that belied the No Confidence motion moved by the opposition here in this house.

Replying to the marathon debate that went late into the night, he said, “the motion was politically motivated to gain cheap publicity and had been moved more to please party bosses in Delhi than to hold serious discussion on governance issues.”

Earlier speaker Tulsi Ram, after question hour, intervened to inform the house that a notice expressing No Confidence in the leader of the house and the government had been received from opposition leader Vidya Stokes that contained signatures of 22 other congress members and the house needed to decide when to take it up.

Taking the floor the Chief Minister asked the speaker to take up the motion for discussion immediately by suspending listed business and to continue with the debate till voted upon.

Moving the motion Stokes said that there was a failure of governance all around, forcing the opposition to repose No Confidence in the government.

She said the BJP tenure was full of scams and counted land scam, pulses scam, education scam, hydro project scam among others.

”Both BJP and its government are not institutions with a difference in Himachal Pradesh but institutions that breed endless scandals and corruption,” she said.

“Instead of safeguarding the interests of the people, they have put the state on sale,” he said.
Never before have senior leaders from the ruling party, which includes sitting MP Rajan Sushant leveled charges of serious corruption against their own government, he said.

Suffocated in a corrupt regime, some have even left the party, he added.