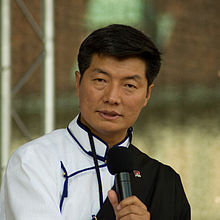 Dharamsala: It has been a year of global diplomacy for Tibetan Prime Minister-in-exile Lobsang Sangay for a land he has never been to.

The 43-year-old and Harvard educated elected head of the Central Tibetan Administration, based in this northern Indian town, completes a year in office Wednesday.

After stepping into the shoes of the Dalai Lama, seen as a demi-god by his people, Sangay toured the globe trying to build up support for the Tibetan cause. He had taken over the reins of the exile government from 74-year-old monk scholar Samdhong Rinpoche, who held the post for the past 10 years but was overshadowed by the Dalai Lama.

With the Dalai Lama stepping down from diplomacy and active politics, the prime minister’s post has acquired added stature.

“My recent visit to Washington was successful. First, it was aimed at political perspective. Second, we managed to meet prominent US officials, mainly to do with foreign affairs,” Sangay told IANS.

Besides the US, the prime minister toured 15 countries, mostly in Europe, in the past one year.

“At all meetings, we garnered support on the situation inside Tibet,” said Sangay, once dubbed a terrorist by China for his earlier association with the radical Tibetan Youth Congress.

For a peaceful resolution of the Tibetan issue, Sangay is treading the Dalai Lama’s middle way policy that seeks genuine autonomy within China.

“Our aim was to apprise the world that lack of freedom and (Chinese) repressive policies are pushing the Tibetans to set themselves afire. It’s very important to let the world the situation in Tibet.”

According to Tibetan officials, Sangay apprised the officials and lawmakers about the situation in Tibet, which is virtually out of bounds for overseas visitors.

The Chinese authorities have stepped up their crackdown against suspected dissidents in Tibet.

“Sangay’s aim was to press US officials to depute a fact-finding mission to Tibet to investigate human rights issues,” a senior minister in the Tibetan cabinet told IANS.

For Sangay, born in a refugee settlement in the eastern Indian hill town of Darjeeling in 1968, repression, cultural assimilation and economic marginalisation in Tibet is unacceptable.

“In Tibet people are taking the extreme step (of immolating themselves) to protest repressive policies,” he said.

But Sangay believes in dialogue.

“We are also willing to negotiate with the Chinese government any time, anywhere.”

The last and ninth round of talks between the Dalai Lama’s envoys and the Chinese was held in Beijing in January 2010.

Some 140,000 Tibetans now live in exile, over 100,000 of them in India. Over six million Tibetans live in what is now known as the Tibet Autonomous Region.