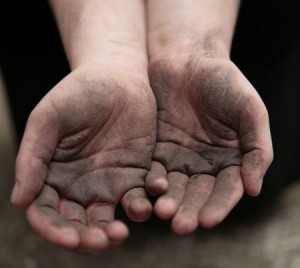 Srinagar: Perhaps nobody follows the newly-installed traffic signals in this Jammu and Kashmir summer capital as intently as Nasreen, 12, who stops begging the moment the lights turn green! She cherishes the few moments of inactivity on a day that can stretch from 10 to 12 hours.

The minor has been forced into begging, a practice that flourishes despite preventive laws, by her parents.

“We belong to Bihar. My family includes my father, mother and four brothers. People easily give alms during (the holy month of) Ramzan.

“I earn about a hundred rupees daily,” Nasreen said as she pocketed a fiver a waiting motorist had given her.

Srinagar is presently ‘booming’ with hundreds of beggars who catch the faithful outside mosques and shrines and at busy traffic crossings.

While labourers in the rural areas are paid a daily wage of Rs. 110 under the Mahatma Gandhi National Rural Employment Guarantee programme (MGNREGA) – and that too for only 100 days a year – a beggar in Srinagar is believed to earn around Rs.200 daily for as many days as he or she wishes to “work”.

“Begging does not require much physical effort. All that the beggars do is implore and try to evoke the nobler sentiments of the people. This becomes very easy during Ramzan, when people spend most of their time in prayer and penance,” said Nisar Ahmad Shah, a local doctor.

Women carrying infants in rags and physically challenged children being ferried in handcarts are a common sight in the city these days.

The Jammu and Kashmir Prevention of Beggary Act, 1960, specifically states: “Any beggar, exhibiting any sore, wound, injury, deformity or disease to earn money is a cognizable offence and any police officer under section 4 can arrest the beggar without any warrant and the offence is punishable with imprisonment for one year to three years by summary trial.”

Despite the law against begging, the menace continues unabated as thousands of tourists have arrived in the Valley during the summer months, as have hundreds of non-local beggars.

Interestingly, there is competition of sorts between the local and non-local beggars.

“Sir, my husband was martyred in Kupwara. I have nobody to care for my 10-year old son”, says a local woman as she pushes her way through the crowd of non-local beggars at a crossing in the city.

Many believe the beggars in the city have perfected their craft as they operate in packs.

The growing affluence of the people also seems to have fuelled the menace of begging.

“The other day, I refused a beggar saying I did not have any change. For how much did I need change, he asked. A thousand rupees, I told him. He said he had the change,” said Master Ghulam Nabi, 69, a retired headmaster.

That beggar could have been an exception but the majority of them live in makeshift slums on Srinagar’s periphery.

“We have a sizable number of beggars in Ganderbal and they literally tear your clothes outside the mosques these days”, said a resident there.

“Although there is a law against begging yet looking at the pitiable conditions of those who engage in begging one does not feel like using force to prevent them,” said a police officer here who requested not to be named.

With this kind of laxity, it is not surprising that the scourge continues unabated.