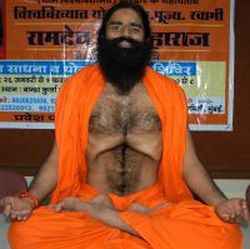 New Delhi: Yoga guru Baba Ramdev said he has set a deadline for Sunday evening for Prime Minister Manmohan Singh to act on his demands, including the return of black money stashed abroad.

Addressing thousands at Ramlila Maidan here, Ramdev said he was not questioning the personal integrity of the prime minister.

“But if he does not take action by this evening on the legitimate demands of our agitation, then there will be a question mark on his political honesty,” Ramdev told his cheering supporters.

The yoga guru also announced he was continuing his fast. He Thursday began a three-day fast against black money and corruption which ended Saturday evening.

Ramdev said he has written to the prime minister listing his demands, which include bringing back black money stashed in foreign banks, a strong Lokpal Bill and a transparent process in naming heads of the Central Bureau of Investigation (CBI) and the Election Commission.

“I am willing to continue the fast till the time government acts. But we will announce Monday morning when we will end the fast,” Ramdev added.

“My intention is not to defame Congress… Whichever political party is willing to fight against black money and corruption, it can join my agitation,” he said.