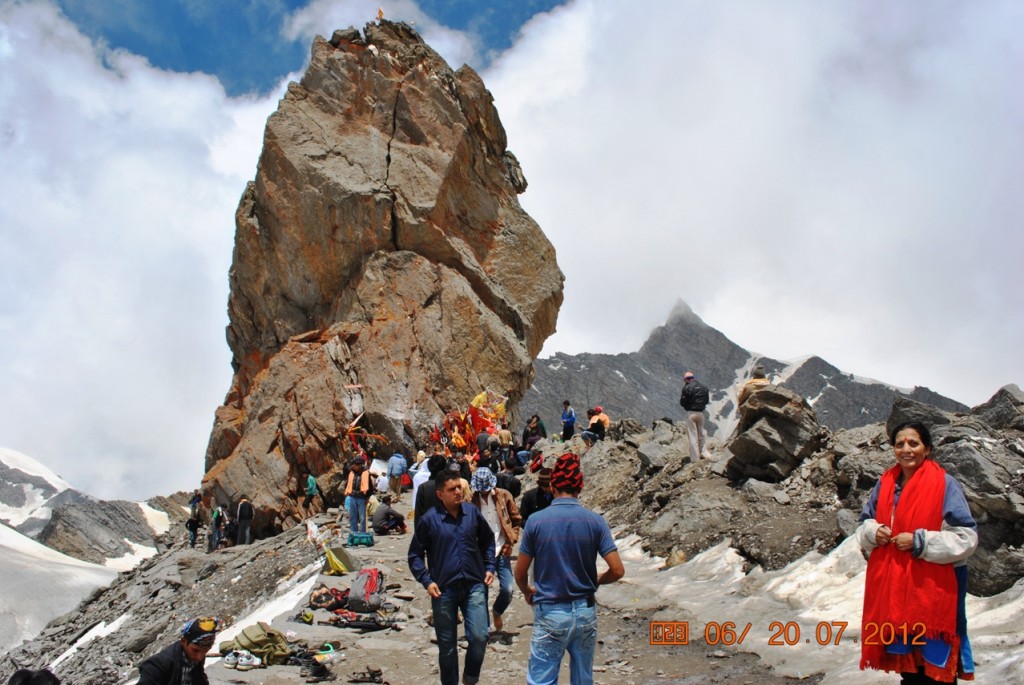 I shall be telling this with a sigh
Somewhere ages and ages hence:
Two roads diverged in a wood, and I—
I took the one less traveled by,
And that has made all the difference.

When there are more than one choice available and only one of them can be taken up, what would one do? What are the criteria that make one take a decision? I never could understand how people take a more difficult path when a comparatively much traveled path is available but during my Shrikhand trekking I could feel the difference a less travelled road can make to your life.

When I decided to undertake an arduous journey to Shrikhand, all my near and dear ones tried to dissuade me from, what they thought was, such an irrational decision. But as stubborn I was the second step was to find out various approaches to Shrikhand. A massive search and talking to people culminated into the information that there are three routes to reach Shrikhand.

One approach is from Kullu side—last village connected by road is Bathad in Banjar Block of Distt. Kullu…From Bathad a steep track leads to Bashelu Pass and then it leads to an amazingly beautiful village Sarahan in Kullu not the Sarahan in Shimla district.

Second approach is from Rampur Busharhr-Arsu-Bagipul side — last village connected by road from this side is Bagipul, in Nirmand. From Jaon a steep trek

And the third approach is via Rampur Bushahr- Jeori–Phancha…. but this one is very hard and usually local people from Shimla-Sarahan area use this track. The 2005 edition of the Himalayan journal published a write-up on this peak. It says that the Jeori approach (from NH22 / Sutlej valley) is both difficult and dangerous, and the approach from Bagipul (the pilgrim approach) is the easiest. The party that did the route approached from the Tirthan valley, which is of medium difficulty.

We fell for the most difficult and dangerous approach from the Jeori-phancha side and that’s what made the trip truly memorable. I could experience the truth of Paulo Cohelo’s advice, “Be brave. Take risks. Nothing can substitute experience.” We were not only able to complete the Yatra but the best part is that we started from the Jeori side and came back from the Bagipul side and thus had a full Parikrama of the Shrikhand Kailash! We completed the Yatra in three days so I would be covering the account in three parts comprising three days.

It would be appropriate to introduce ourselves before the advent of the journey. I, Saroj Thakur, 56 years old, consider myself in a good physical shape as I had been jogging hard since last four months to build up stamina. My brother 46 years of age has been a sportsman and was considerably active. His friend Luchy is barely 32 years in age and is agile and swift. We had no idea of the trekking route and had started on our own.

We reached Phancha, the last village connected by road on the Jeori—Phancha road, at about 6-20 a.m. 18 July, 2012. An English style Bunglow greeted us at the roadside.

Inquiries revealed that it was Forest Rest House constructed in 1914 and that the English Saab Log would come and stay here during their trekking expeditions in what we call  today, the great Himalayan National Park!

The trek started from Phancha and in about an hour and half we had reached Phanchakanda. A small shed-like house with an attached makeshift kitchen welcomed us. 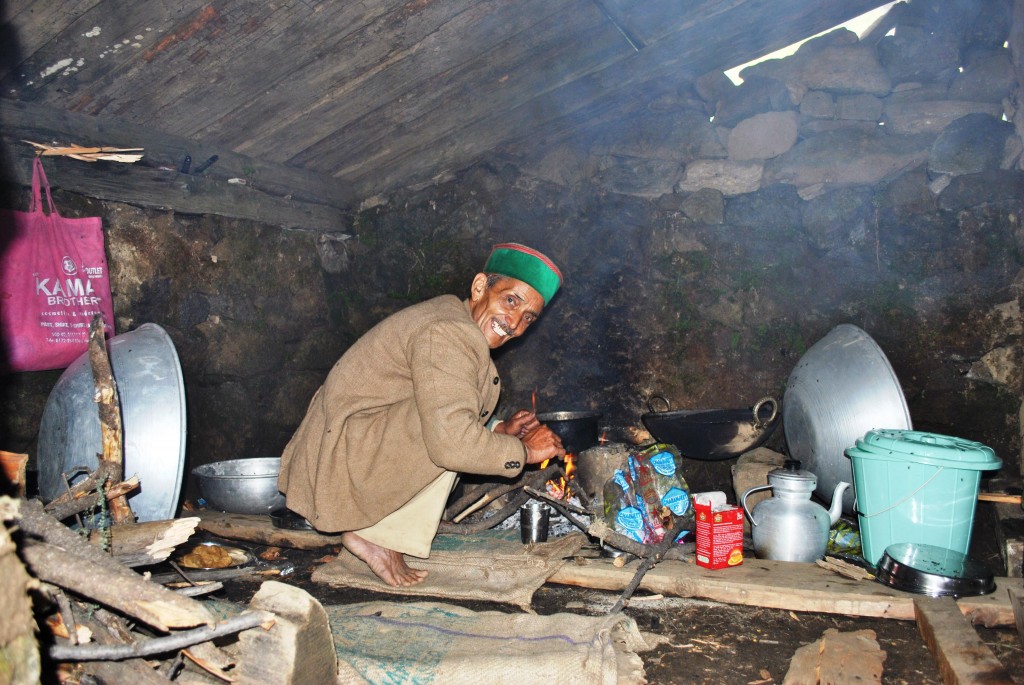 The person in charge Sh. Negi offered us a cup of tea. It was an offer that could not be declined. We had a steamy, sugary glass of tea that invigorated us. The panorama by now was pleasant and easy. We were thoroughly enjoying every step of our pilgrimage. By this time we had met Shaunka Ram and Ram Rattan, the friendly shepherds, who were on their way to their flock of sheep. 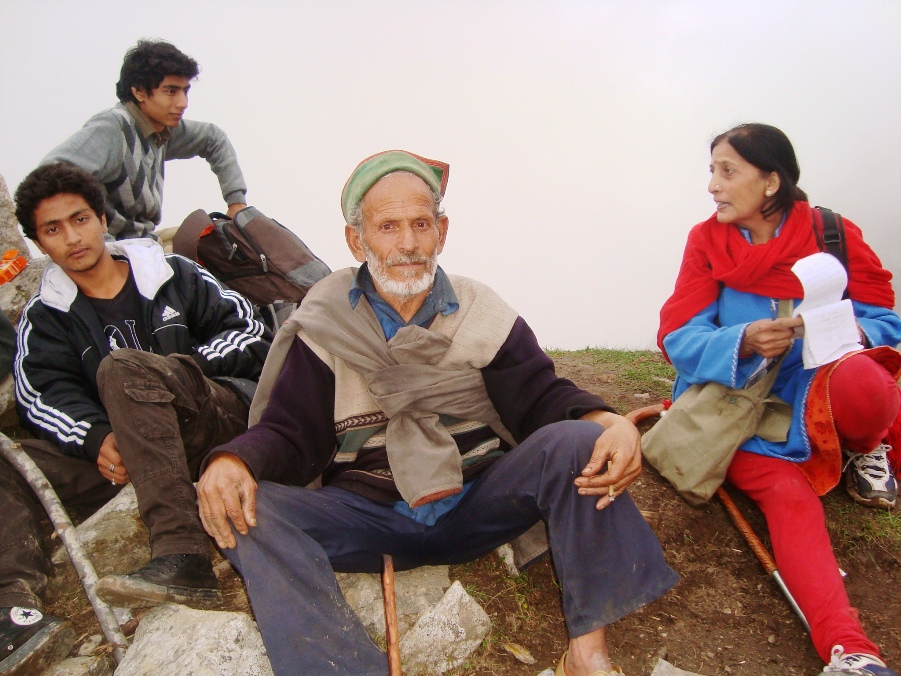 We were so happy to have found some company as till then we three were all on our own! And because both of them were much familiar with the track we had found godsend guides.

After Fanchakanda we descended a little to GaishavNallah where we filled our bottles with water as Shaunka Ram told us that we won’t have any water till Parvati Bagh! The steep ascent started amidst heavy forest area. The trees were big and large. The Sunrays found it difficult to reach us. The foliage was exotic.  I saw wild rose bushes with pink petals of roses. I would chew some to have a taste of real rose petals! We were tired but the ascent would not come to an end. It was perhaps some eight kilometers ascent—steep and tough!

We reached Sapavaat around 11-45 a.m.where Sunder Singh Negi of the Shrikhand Sewa Samiti of Jakh Devta had organized a free lanagar. It was a treat to my eyes and nostrils to see and smell the freshly cooked rice and daal. 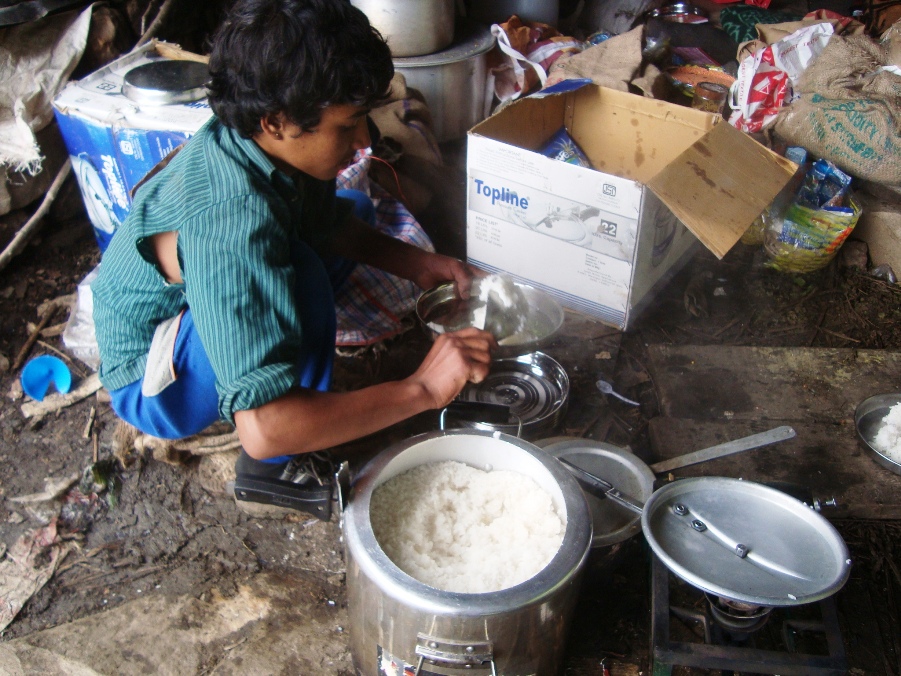 We had a good meal. Luckily we met a group of college students at this point and now our number had swelled to eleven! 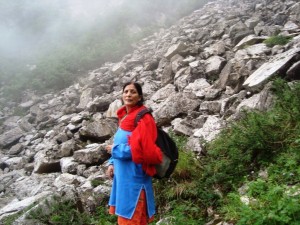 The trek from this point onward was tougher than the earlier part. There were big boulders, rocks and stones that comprised the path. Rather there was no path, we had to find one that suited us. Each one of us was barely inching towards the distant top that seemed away, much away. We would sit down for a while to gather strength and once again resume walking. The boulders rose higher and higher as if to the sky and we kept on moving up and up. The yellow marks on the boulders were the only symbols of the path. 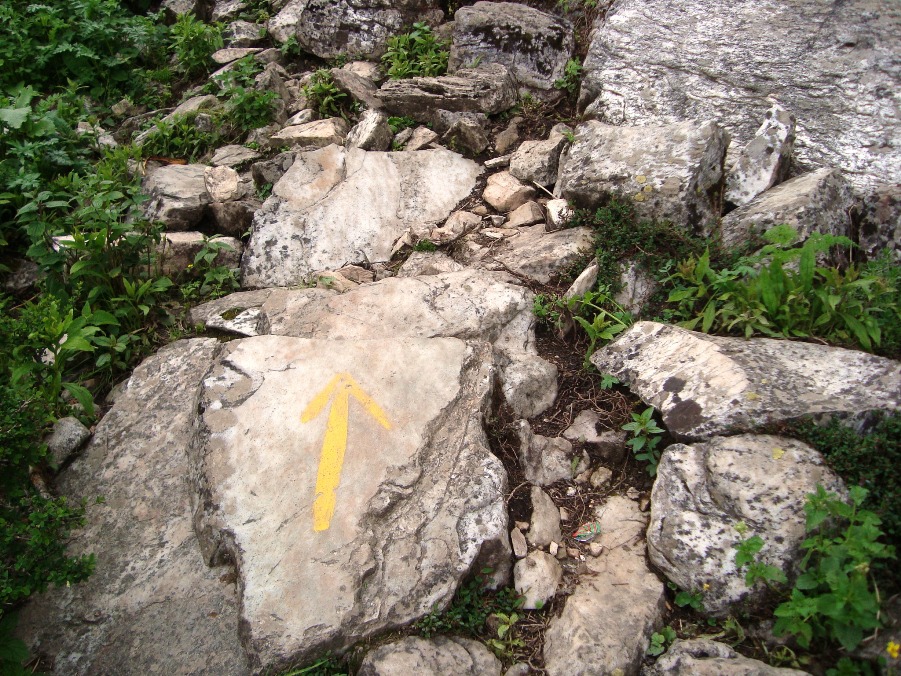 The green plants on both the sides made entire ascent wonderfully full of excitement as the ferns were as big as grass and so healthy and green the like of which I had never seen anywhere even in pictures.

We continued walking for around four hours. At the point where this ascent came to a small ridge, I heaved a sigh of relief to have reached the place where we would stay for the night. But when I looked around, I nearly fainted out of fright. There were deep gorges on both the sides and we had to walk now on the top of the mountain, balancing one foot at a time in some place and dislodge the other after that. On both the sides were dangerously steep gorges. I just could not go on. I was frightened of heights and here I was in a very precarious condition. Shaunka Ram would extend his hand to me and would coax me to move on. I had no choice than to move on. I left everything in His hands and moved on. This was the most dangerous part of the trek so far. I think we walked for some three- four kilometers like this. 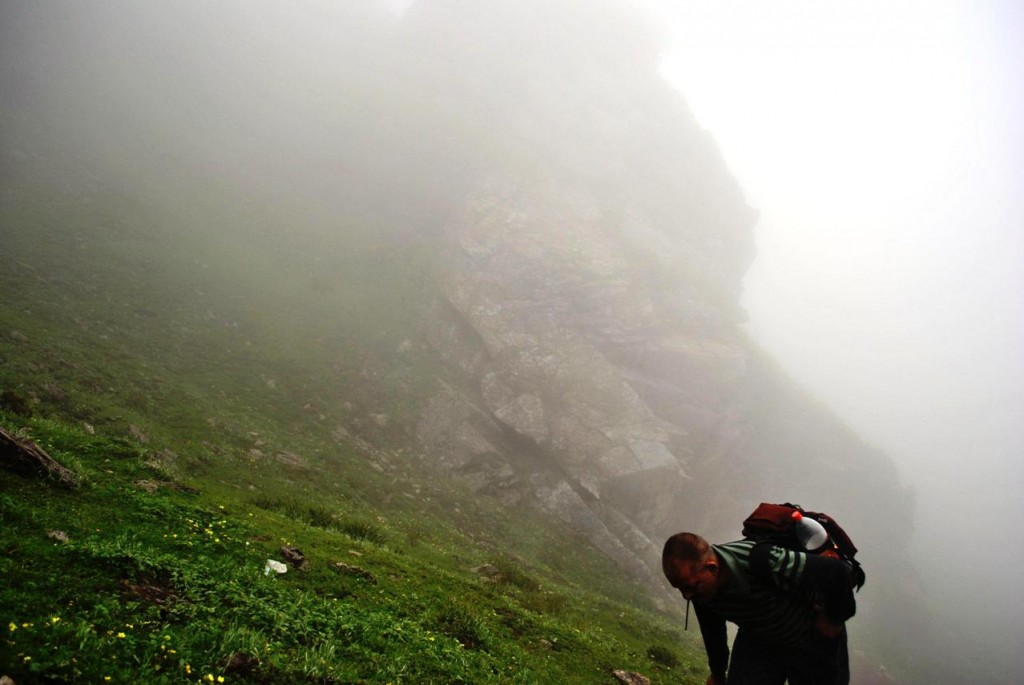 When we reached further, we were astounded to see glaciers, steep and deeply inclined, staring at us. We had to cross those glaciers to reach the place of our night halt. There was no escape of any kind. We had no choice but to walk and cross the glaciers. The snow was hard and slippery. After crossing one glacier when we would take a little respite that the worst was over and walk for some distance, another glacier would come in sight. It was never-ending walk on glaciers.

At last at one point Shaunka Ram pointed towards a small dot in the distance and said, “this is the place that you would be staying for the night, come on, it is very near now!” I could not even see the small dots that stood for the night camp. But we walked on and on and finally at around 7 p.m. we were at Majbohn known locally as Fahl where the shepherds had put a tarpaulin over some big boulders under which were some place sheltered from winds and rain. The shelter seemed like a heavenly place to us.

We had started the first day journey at 6-20 a.m. in the morning and by 7 p.m. we were  able to reach the night halting place safely. We hurriedly had rice and daal. I could not take even a morsel of it. I wanted to lie down. I found a little place to cuddle in a blanket that was thin and cold. We all waited for tomorrow morning and what it would hold for us!

But tomorrow is another day and would be a new experience, with these thoughts I tried to sleep when the temperature outside was near zero and the cold wind rushed in from the entrance of the tent where I was sleeping at the very entrance!