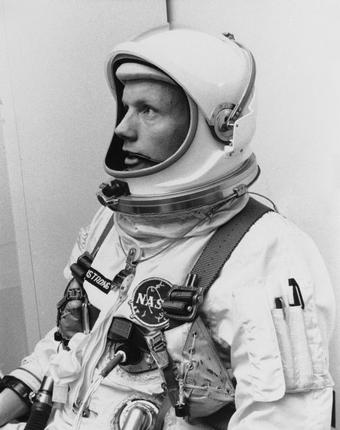 Washington: American astronaut Neil Armstrong, the first man to set foot on the moon, has died at the age of 82, his family said. US President Barack Obama said he was “among the greatest of American heroes”.
“We are heartbroken to share the news that Neil Armstrong has passed away following complications resulting from cardiovascular procedures,” Xinhua quoted the family as saying in a statement Saturday.

The statement did not say where Armstrong died.

Describing the astronaut as “a reluctant American hero who always believed he was just doing his job”, the statement said: “He served his nation proudly, as a navy fighter pilot, test pilot and astronaut.”

Armstrong landed on the moon July 20, 1969 by taking the Apollo 11 spacecraft and is best remembered for saying: “That’s one small step for man, one giant leap for mankind.”

Armstrong and fellow American astronaut Buzz Aldrin spent two and a half hours walking on the moon, collecting samples, conducting experiments and taking photographs, while astronaut Michael Collins remained in orbit in the command module.

Obama lamented the death of Armstrong, calling him a man “among the greatest of American heroes – not just of his time, but of all time”.

“When Neil stepped foot on the surface of the moon for the first time, he delivered a moment of human achievement that will never be forgotten,” the president said in a statement.

NASA administrator Charles Bolden also praised Armstrong, saying he will be remembered for “taking humankind’s first small step on a world beyond our own”.

“As we enter this next era of space exploration, we do so standing on the shoulders of Neil Armstrong,” Bolden said in a statement.

Born Aug 5, 1930, in Wapakoneta, Ohio, Armstrong served in the US Navy and joined the Korean War before becoming an astronaut.

After the war, he served as a test pilot at the National Advisory Committee for Aeronautics High Speed Flight Station.

He left NASA a year after the Apollo 11 mission to become a professor of engineering at the University of Cincinnati.