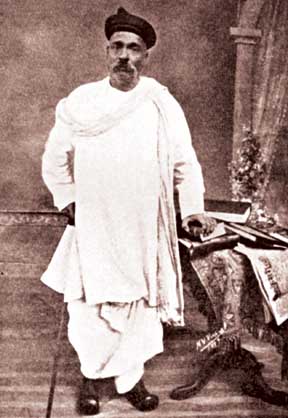 Pune: Lokmanya Bal Gangadhar Tilak’s booming voice resounded at a jam-packed gathering here 92 years after his death as everyone listened in pin-drop silence to an audio clip of a speech of the first and strongest advocate of ‘Swaraj’.

After the 97-year-old clip was heard Friday, Deepak J. Tilak, great-grandson of the renowned freedom fighter, felicitated Mukesh Narang, from whose collection the rare audio was recovered. It had been recorded by Narang’s grandfather Sheth Laxmichand Issardas Narang of Karachi.

Kesariwada, the Tilaks’ ancestral mansion, was the venue of this event.

Tilak’s booming voice was heard again 92 years after he died. History teachers and students were in the gathering, comprising also media people and prominent citizens, besides Tilak’s descendents.

The crowd hung on to every word in the 90-second clip, and responded with tumultuous applause. There were demands for an encore, and the brief clip was played three times over, said a staffer of Kesari newspaper.

In the clip, Tilak chides a noisy crowd and urges silence at the start of a music concert featuring legends like Master Krishnarao, Bal Gandharva and Devgandharva Bhaskar Bakhlebuva. The concert was held during the famous Ganeshotsav celebrations at Kesariwada on Sep 21, 1915.

“I am not an expert on classical music, but I am very much aware that Bhaskarbuva is a great artiste. That is why I have invited him to perform here. I am proud of him. I thank him on behalf of everybody. With the blessing of Lord Ganesh, I feel he should perform here again. I shall end here and take your leave,” the leader says.

Tilak’s great-grandson, Deepak J. Tilak, said that those who heard Tilak fell silent and the programme continued as planned.

“It is most befitting that we played the clip today when we are celebrating Ganeshotsav as per the Tilak Almanac. After all, it was Tilak who started the public celebrations of Ganeshotsav which has now become an important social and religious tradition,” he remarked.

The clip-playing event was telecast live by several local television channels. It was repeated several times on television.

One of the stalwarts of the Indian freedom struggle, Lokmanya Tilak had given India the magic mantra, “Swaraj is my birthright, and I shall have it” while speaking at a public rally in April 1916 in Ahmednagar. Tilak died in 1920.

While video and audio recordings of the speeches of Mahatma Gandhi, Pandit Jawaharlal Nehru, Subhash Chandra Bose, Mohammed Ali Jinnah and others are available, this is the first time an authentic audio clip of Lokmanya Tilak has come to light.