BJP (Bhartiya Janata Party) clearly seems to be the party in spotlight. With the Congress time and again showing its inefficiencies in establishing the law and order, it’s the opposition that the people are looking up to at the moment. In a candid tete-a –tete with reporter Smith Mehta, veteran leader of BJP, Arun Jaitley bares it all on raging issues of Anna Hazare, Terrorism, Anna Hazare and the political unrest in Karnataka. 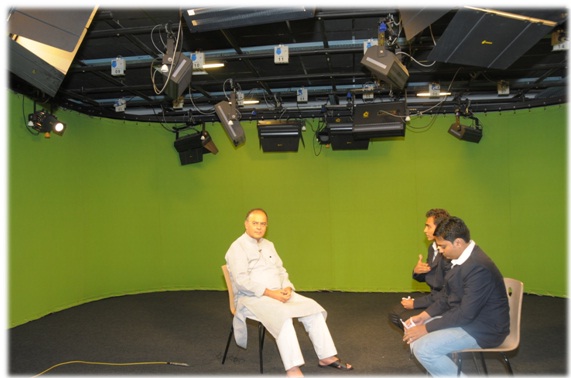 Excerpts from the interview:

With the recent untraced and unwarned terror attacks in Pune, how ready is the country to tackle such issues?

India has always been the target of the terror attack. It is mostly the handiwork of the sleeper cells belonging to Indian Mujahideen, Student Islamic Movement in India (SIMI). These sleeper cells provide a convenient cover to the terrorists to strike in public places and create a fear apart from the colossal damage. The bombs that went off in Pune did not explode with high magnitude thanks to the dampness and rain. Had the bombs blown up in full potential, the effects would have been massive.

P.Chidambaran, the erstwhile Home-Minister heavily supported the proposal of NCTC (National Counter Terrorism Center) during his tenure. With the recent change in the control of hands, where do you see it going?

NCTC within itself is not a bad idea. Its one of the effective machinery of strengthening the country’s intelligence mechanism and prevention of terror attacks. The idea is to have a uniform transparency over the sharing of intelligence information between the state and the centre. But, the only contention here is to take the consensus of the States into the matter. The proposal needs to be amended in such a way so that it does not affect the federal structure of the states. The autonomy of the state should not be tampered.

What are your views on Sushil Kumar Shinde, being appointed as the Home-Minister given the fact that he is one of the accused in the Adarsh Scam?

Frankly, I am not too happy with the appointment of Sushil Kumar Shinde more so, after the recent blackout in the North and the Eastern regions during his tenure as the Power Minister. I have serious doubts over his ability to serve as the Home Minister.

Anna Hazare recently announced his wish to float a political party. Is he losing his Lokpal identity and moral ground? Will it also infuse a new political culture and ideology in the country?

Anna Hazare’s decision to enter politics in order to root out corruption is a good initiative. It would be interesting to see on how they elect their party members. Also, a party’s future depends a lot on the vision that it has and the kind of opinion that it promotes on different issues. It cannot survive on an one-point agenda. Hence, it is too early to comment whether it will infuse a new ideology or not.

The landslide victory in 2004 in Karnataka drew heavily from your contribution. However, the present situation presents a different story. What are the reasons behind the unrest?

The victory in 2004 wasn’t as big as the way we romped into the power in 2008. The reason behind the political unrest is mainly due to the short time in which we gained power. The party gained a lot of seats within a few years. Hence it takes some time to consolidate the state affairs. But I am sure that with time, we would be able to run a stable government.

With elections coming up later this year in Gujarat and Himachal Pradesh, both BJP ruled states, it would be interesting to see how BJP fares in the two states.