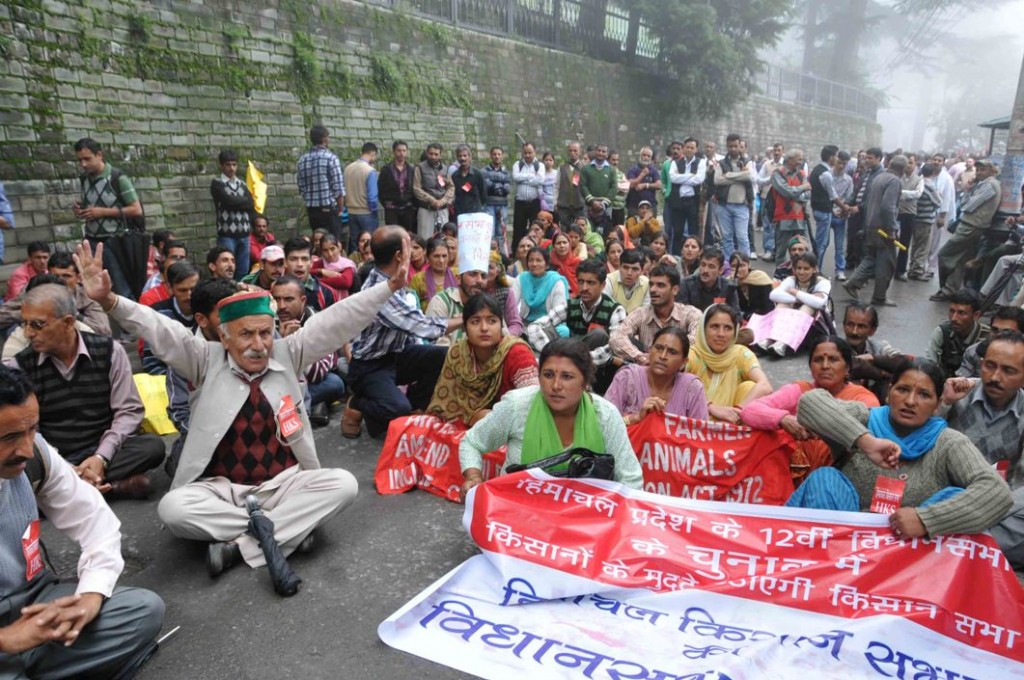 Shimla: Himachal Pradesh Kissan Sabha staged protest before the state assembly here today to press different demands and raised slogans against the BJP rule alleging that it failed to sort out burning problems faced by the peasantry in the Kasumpiti Assembly segment.

Addressing the protest rally at Vidhan Sabha choke, HKS president Kuldeep Singh Tanwar pointed out that assembly segment despite its proximity to the state capital has remained backward due to the callous attitude of people’s representatives as they never tried to resolve the issues on time.

Accusing the successive BJP and Congress rules for being indifferent to this area Mr. Tanwar alleged that leaders of the two parties have never given impetus on development issues. He also alleged that they were primarily indulged in vote bank politics of princely estates, big household, region and caste.

Octogenarian Kissan Sabha member Balk Ram Nirmohi noted that the remotest Pirantrai Gram Panchayat is still not linked with the mainstream of life as it was deprived of all development schemes. He said that the Auravedic Dispensary in the panchayat was still running without any staff for last 24 months.

He said that 41 percent populations of this segment belonged to the ‘Dalit’ community but they remained deprived of special schemes. “ The higher education rate is less than five percent in the area as there are no government colleges.

Students have little opportunities to get admitted in professional courses  as  only 4 out of total 19 schools in the area offer commerce and science streams.

Later on,  the delegation of Kissan Sabha also handed over a memorandum to Chief Minister Prem Kumar Dhumal and opposition leader Vidya Stokes.