Shimla: Battle for supremacy in Himachal witnessed a repeat of 2007, to the day, as police battled a strong opposition demonstration to stop it from attempting to gherao the Vidhan Sabha in session.

Five years ago on August 29, it was police intervention that averted a clash between ruling Congress and opposition BJP workers in which senior BJP leader Shanta Kumar was also injured. 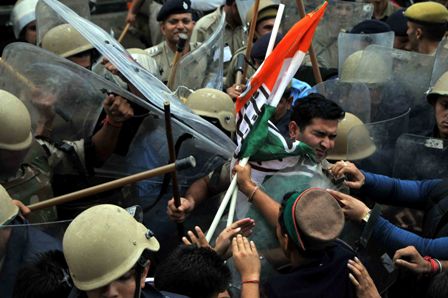 Led by Virbhadra Singh, fresh from being made the new state congress president, thousands of party workers held a protest demonstration on The Mall Road near the AG Office today.

Situation went out of control after the demonstrators who had patiently heard the public addresses of the leader, attempted to break the police barricades in a bid to march to the Vidhan Sabha that had been declared a prohibited area.

On police using water cannons to disperse the crowd, some protesters hurled stones at the policemen. The police finally resorted to lathi charge and fired tear gas shells that left several persons injured.

“We did not intend to harm anybody,” said AP Siddique, IG Police, “but to protect the Vidhan Sabha was our duty.”

“The administration had permitted Congress to stage the demonstration at a given spot but they attempted to march towards the Vidhan Sabha,” said Arun Sharma, deputy commissioner Shimla.

Claiming that uncalled for show of force was used to deter the opposition party from protesting peacefully, Vibhadra said, “the government was showing zero tolerance to any kind of opposition.”

Receiving a grand welcome along the route to Shimla from Delhi to assume charge of steering the party in the state, the veteran Congress leader drove straight to the protest demonstration venue.

In his address to the public, Virbhadra hit out at the PK Dhumal led BJP government saying that it needed to be shown the door for patronizing large scale corruption.

On August 29, 2007 the city witnessed a police lathi charge to disperse a BJP protest demonstration that was led by Shanta Kumar and then opposition leader Dhumal, who attempted to ghearo the Vidhan Sabha when it was in session.

To counter the demonstration for which notice had been given, Congress decided to hold a counter demonstration at the gates of the Vidhan Sabha while the opposition was allotted space at Chaura Maidan to hold their protest.

After hearing out the leader, large number of BJP workers and their leaders decided to march to the Vidhan Sabha.

Seeing BJP workers approach the Vidhan Sabha, congress supporters who gathered in equally large number were gathered at the gate moved to stop them.

Police tried to intervene and avert a clash among the two parties but had to use force to disperse the BJP workers. Several policemen and party workers were injured and senior BJP leader Shanta Kumar’s arm was injured in the clash.