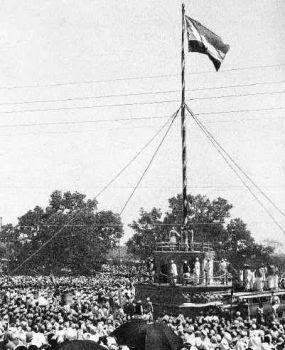 New Delhi: Freedom as an idea is no longer what it was 65 years ago when India emerged from the shackles of British domination at the stroke of midnight Aug 15, 1947. Today, it is an exercise in introspection on how much ground we have been able to cover towards being a sustainable, sovereign, fair, thinking and developed nation, as envisaged in the manifesto of a free India.

It is a not a question of freedom movement any more; it is how people manage their own affairs, says freedom fighter Rameshwar Dayal. “For the first few years, it was well, particularly during emergency when everything was on time. Deterioration set in soon after emergency,” Dayal told IANS.

The freedom fighter spent six months in jail – three months in Delhi and three in Lahore – in 1942 for taking part in the protest march in the capital, when he was a student of Class VII at a gurukul.

Dayal advocates “reforms from top-down”. “The crusade against corruption is right, but you cannot clash with the government. The solution has to come about with dialogue. Corrupt officials have to be given a time-frame to reform or should be dismissed. Action should be instant. The good aspects of emergency have to be adopted once more,” he said.

Writer and language activist Namita Gokhale says “India is a republic of ideas”.

“In a diverse and plural society like ours, real independence comes from co-dependence and the ability to respect and accommodate differing points of view,” Gokhale told IANS.

Younger Indians like 30-year-old entrepreneur and gallerist Anubhav Nath, the brain behind the Tihar Art Project, say post-2000, the opening of opportunities in the country has been phenomenal. “This is like a phoenix. What we are seeing right now is tomorrow’s history being made today,” Nath told IANS.

“The country is maturing at 65, becoming a senior citizen. The people of this country are astute. The corruption crusade is good but the people involved in it have vested interest. We need freedom from both,” Nath said.

Freedom for professor Simi Malhotra of Jamia Millia Islamia is “basically about an important historical and symbolic signpost in our lives”. “We need to move beyond this symbolism of freedom and translate it in our everyday lives and see to it that it extends to the margins of the society,” Malhotra told IANS.

Malhotra said the “principally and practically all players in the society have a big role to play in making the government accountable”.

Lalit Dubey, a white-collar corporate executive in Delhi, however, advises caution against investing hope in the idea of freedom.

“Development on the ground may be a recent reality, but the middle class is in a dilemma. Politics is a sham, controlled by a select dynastic few, and we are being held captive by neo-imperialists. They come in every colour,” Dubey told IANS.

He added: “Injustice is rampant and equal opportunity for sexes is a myth. Economic disparity and poor awareness have created a new underclass, which cannot balance the legacy of freedom with misplaced aspirations. It has to change. A new freedom has to come from the empowered roots.”