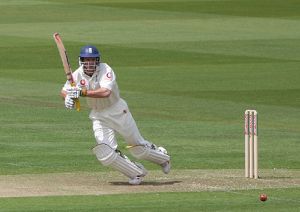 The 35-year-old Middlesex opening batsman, who led England to two Ashes victories and the summit of the Test rankings, is retiring after 14 years in the professional game.

Strauss will be replaced as Test captain by Alastair Cook, who will also continue to lead the One-Day International side.

Strauss made his England debut in an ODI against Sri Lanka in 2003 and was awarded a Test cap a year later against New Zealand, scoring a century on debut.

He has gone on to win 100 Test caps, captaining the side in 50 of those matches, and also make 124 appearances in ODIs and four in Twenty20 internationals.

His international career has spanned 11 years, during which the left-handed batsman has scored 21 Test centuries and six ODI hundreds.

Strauss said: “After much thought over the last few weeks, I have decided to step down as England Test captain and announce my retirement from all forms of cricket.”

“It has clearly been a tough decision to make, but I believe that it is both in the best interests of the England cricket team and myself to step down at this stage.”

Andrew Strauss, holding the urn, celebrated leading England to retention of the Ashes in 2010-11 at the Sydney Cricket Ground.

“There are too many people who have helped me on this incredible journey to mention them all by name, but I would like to thank all the Middlesex and England players I have played alongside, as well as the phenomenal coaches and support staff with whom I have been fortunate enough to work,” he said.

“Particular mention has to go to Andy Flower and Duncan Fletcher in that regard. It would also be remiss of me not to thank Middlesex county cricket club, the ECB and the PCA for their support and guidance over the years.”

Strauss said, “No-one can play international cricket for any length of time without having an incredibly strong support network around them, and I’d like to take this opportunity to thank my family for going through it alongside me over the course of my England career.”

“I am extremely proud of everything I have achieved as a cricketer, and I have found myself very fortunate to play in an era when some of English cricket’s greatest moments have occurred.”

“I have loved every minute of it and all that remains is for me to wish Andy, Alastair and the rest of the team the very best for the coming months. I will be an interested spectator,” the outgoing captain said.

David Collier, ECB chief executive, commented: “On behalf of the ECB and everyone involved in cricket, I’d like to thank Andrew Strauss for his outstanding contribution to the game.”

“Andrew has been a highly successful captain and opening batsman for Middlesex and England, who will be remembered for leading the side to two Ashes victories and to the top of the Test rankings.”

Strauss reached his 21st and what proved his final Test century for England, against West Indies at Lord’s earlier this summer.

“He has shown tremendous integrity, dedication and commitment both on and off the field and under his leadership the side has grown immeasurably and reached new levels of professionalism,” Collier said.

“Andrew’s calmness and authority when dealing with some of the most difficult moments in our sport in recent times should be applauded and I have no doubt that his contribution as an ambassador for the game will be recognised by anyone who has had an opportunity to spend time with him.”

“His legacy within the game will be felt for many years to come and we now need to continue to build on the progress we have made under his leadership,” the ECB chief said.

“I would like to congratulate Alastair on becoming Test captain. He has shown he has the traits needed to be a successful captain and has demonstrated his leadership capabilities as one-day captain over the last 16 months.”

“On behalf of the ECB I would like to wish Alastair and Andy Flower all the very best for the exciting challenges that lie ahead.”

Cook said: “Andrew’s contribution to England cricket in recent years is evident to everyone who follows the sport, but only those of us who have been lucky enough to share a dressing room with him are fully aware of his immense contribution to our success.”

“He has been a fantastic captain, has led from the front for three and a half years and is a true ambassador for the game.”

“To have played 100 Tests for your country is a phenomenal achievement and I want to congratulate him on a superb career.”

“I know this can’t have been an easy decision for him and everyone in the dressing room will be sad to see him go,” Cook said.

“I’m very excited by this new challenge; it is a huge honour to be appointed Test captain and I am very much looking forward to captaining the side in India this winter and beyond, but my immediate focus is on this current NatWest one-day series.”

“Once the series is over I will turn my attention to the Test captaincy and building on the work Andrew has started.”