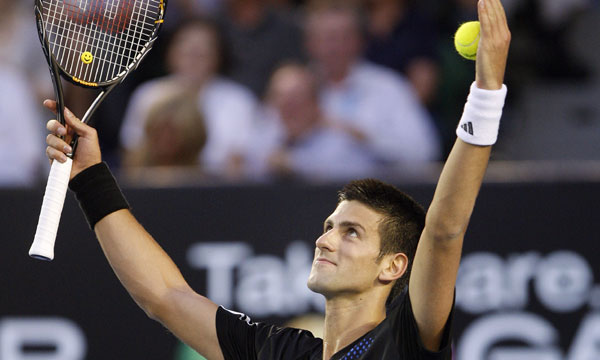 World No.2 Djokovic, the favourite going into the final, overpowered 21st-ranked Gasquet with precise serves and aggressive returns, winning the match in just over an hour, Xinhua reported Saturday.

Sunday’s win was Djokovic’s 12th ATP World Tour Masters title and his first on hard court since Miami in March, serving as a confidence booster going into the US Open later this month.

Gasquet, whose last ATP Masters series final was Rogers Cup here in 2006, beat three higher-ranked opponents to reach the final before his momentum was checked by a dominant Djokovic.

In the first set, Gasquet put up a good fight, earning points on volleys and drop shots with his swift movements on the court and winning his first three service games. But once Djokovic took control and broke Gasquet’s service game to lead 5-3, Gasquet failed to win a single point in the last game and lost the first set 6-3.

Though Gasquet kept hitting the ball from the left side of the court, he was not able to take advantage of the backhand shots.

Gasquet said after the match, “I had a very bad game at 4-3 (first set), and it made the difference. It’s tough when you have Djokovic in front of you and you are not playing your best tennis.”

Djokovic agreed that it was the turning point of the match.

“The opening couple of games of the first game were quite close. I made a crucial break at 4-3,” said the Serbian.

In the second set, Djokovic broke Gasquet’s service in the first game. Gasquet, who is known an all-court player – in contrast to Djokovic’s signature attacks from the baseline – had a few thrilling shots but lost most of the rallies.

Djokovic said he didn’t expect to win the title after his losses at the London Olympics.

“Truly did not expect myself to win this tournament, you know, after the emotional losses in Olympics. I really took it hard,” Djokovic told reporters.

“The losses in Olympic Games were more difficult for me emotionally than Wimbledon,” said Djokovic, who was the flag bearer for Serbia at the opening ceremony.

“The two losses that I had in three days in Olympic Games gave me even more desire to come here and perform my best and try to win a title.”

“So this is actually a huge confidence boost for me,” he said.

Djokovic pocketed 522,550 Canadian dollars in prize money, while the runner-up got half of the winning amount.

The Bryans, fresh off their victory at the Olympics, took the first set in just 20 minutes. The Spanish duo bounced back in the second set and won 6-4.

In the super tiebreaker, the Spanish pair had a match point at 9-8 but could not seal the deal. The Bryans eventually took the tie breaker 12-10, thanks to a big serve by Bob Bryan.