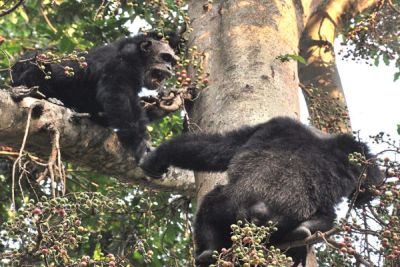 Washington: Research on chimps never ceases to surprise us — the latest one, for instance, says that they are not only capable of learning from one another but also use this social information to create and nurture local traditions.

Researchers focused on a specific behaviour called the ‘grooming handclasp’, where two chimps clasp onto each other’s arms, raise those arms up in the air, and groom each other with their free arm.

A collaboration between the Gonzaga University (Washington) and the Max Planck Institute (Germany) shows that the way in which chimps groom each other depends on the community to which they belong.

Specifically, it is the unique handclasp grooming behaviour that reveals this local difference.

This behaviour has only been observed in some chimp populations. The question remained whether others of their ilk are instinctively inclined to engage in grooming handclasp behaviour, or whether they learn this behaviour from each other and pass it on to subsequent generations, according to a Gonzaga and Max Planck statement.

Edwin van Leeuwen and Katherine Cronin of the Comparative Cognitive Anthropology research group of the Max Planck Institute for Psycholinguistics, led by Daniel Haun, conducted their observations between 2007 and 2012 at the Chimfunshi Wildlife Orphanage Trust in Zambia.

At Chimfunshi, a mix of wild-and captive-born chimps live in woodlands in some of the largest enclosures in the world.

The Max Planck team collaborated with students from Gonzaga led by Mark Bodamer, a team of local chimpanzee caretakers, and Roger Mundry of the Max Planck Institute for Evolutionary Anthropology in order to collect and comprehend the detailed chimpanzee data.

Previous research suggested that the grooming handclasp might be a cultural phenomenon, just like humans across cultures engage in different ways of greeting each other.

The present research shows that even between chimpanzee communities that engage in the grooming handclasp, subtle yet stable differences exist in the styles that they prefer: one chimp group highly preferred the style where they would grasp each other’s hands during the grooming, while another group engaged much more in a style where they would fold their wrists around each other’s wrists.

“We don’t know what mechanisms account for these differences,” van Leeuwen says. “But our study at least reveals that these chimpanzee communities formed and maintained their own local grooming traditions over the last five years.”

The research team also observed that the grooming handclasp behaviour was a long-lasting part of the chimpanzees’ behavioural repertoire: the behaviour was even transmitted to the next generation of potential handclaspers.