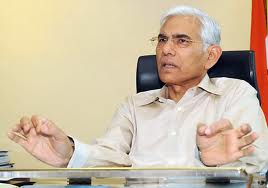 Lucknow: The service records of Comptroller and Auditor General (CAG) Vinod Rai “are not traceable”, the Department of Personnel and Training (DoPT) has revealed in response to an RTI application.

Lucknow activist Arvind Shukla had last month filed the Right To Information application seeking details about the most powerful accountant of the country, who has gained renown as a vigilant anti-corruption watchdog and who was once again in the spotlight after the CAG reports on coal block allocation, power and the GMR-run Delhi airport were tabled in parliament Aug 17.

In his July 11 application, he had sought to know details about Rai such as his Class 10 passing certificate, date of birth, certificate of selection to the civil services, appointment letter, selection into the Kerala IAS cadre and his retirement date.

In a signed response to the RTI (No.13011/20/2012-AIS.I), the DoPT CPIO (central public information officer) Narendra Gautam informed Shukla that the office has been “informed by the concerned section of the UPSC application dossier of Shri Vinod Rai, IAS (KL:1972) is not traceable”.
M
The reply further stated that “the information sought for by you is not materially available with the undersigned”.

The DoPT also suggested that Shukla could follow up his request with the Kerala government as the matter was “more closely concerned to the Government of Kerala”.

Adding again that the department “does not have any record in this regard”, Gautam, an under secretary, also stated that the matter was subsequently being also referred to CPIO, Office of the CAG, Bahadur Shah Zafar Marg, New Delhi, “to provide requested information”.

Shukla, through an earlier RTI, had found that former Uttar Pradesh cabinet secretary Shashank Shekhar Singh’s service records – both as a trained pilot and as a government employee – were never found.

“As part of inquisitiveness I wanted to know about the CAG as his findings have created a storm in the country and have exposed the UPA government,” Shukla told IANS.

Sources in the DoPT say Rai’s service records and dossier were last seen in 2005 and have been missing since.

Said a senior official on condition of anonymity: “Under all circumstances, such a dossier is always put as record with the DoPT and the fact that it is not traceable is just amazing.”

India’s official auditor, headed by Rai, had last week revealed that the lack of transparency in the allocation of coal blocks to private players resulted in a loss of a whopping Rs.1.85 lakh crore ($37 billion) to the exchequer as on March 11 last year. The report prompted the opposition to demand the resignation of Prime Minister Manmohan Singh.