Mumbai: Brikesh Singh is getting ready to climb another tree, this time inside a tiger reserve, and stay there for a month – not for fun or to avoid the big cats but to draw the young generation’s attention to saving the environment.

On Sept 1, the 32-year-old Greenpeace campaigner, born and brought up in the slums of Mumbai, will climb a tree on the site of a proposed power plant inside the buffer zone of the Tadoba tiger reserve in Maharashtra’s Chandrapur district.

Singh, a cyclist and climber, has already built a tree house and equipped it with a solar charger and a laptop – his window to the outside world.

He will be perched atop the tree throughout September and will climb down only Oct 1 – the day the Convention on Biological Diversity takes off in Hyderabad in Andhra Pradesh.

The convention brings together countries for the development of national strategies for conservation and sustainable use of biological diversity.

“I will be in the tree house around 20 feet above the ground in the buffer zone of Tadoba tiger reserve and I will spread awareness about the issues through Facebook, Twitter and blogs,” Singh told in an interview.

“People who need to be made aware about saving the environment are urban audiences who hang out in these networking sites. It is them I need to inspire and get them on my side to put enough pressure on our government,” he said. 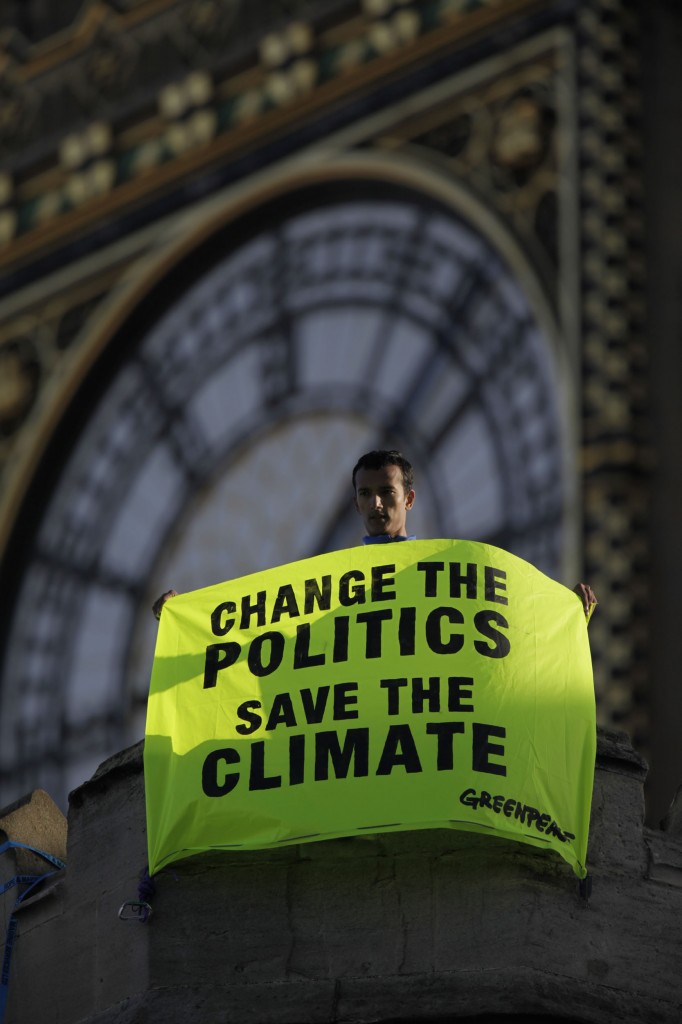 Climbing is child’s play for Singh.

On Oct 11 2009, just before the climate summit in Copenhagen, Singh scaled the roof of the British parliament in London.

“I climbed the roof on Sunday afternoon on Oct 11, 2009. The idea was to stay on the roof all through Monday which was the first day of the last session of parliament before the summit,” Singh said.

“While parliamentarians were continuing with their business, I unfurled a banner which read ‘Change the Politics – Save the Climate’. It is high time the developed world started leading the way in cutting carbon emissions instead of playing dirty politics,” he said.

In 2007, he had climbed a 260-foot smokestack of a thermal plant in Kolaghat in West Bengal and painted ‘Smoking Kills’ on it.

“I was arrested with five other activists and jailed for raising an alarm against climate change. Our case still drags on in the Calcutta High Court,” he said.

Last month, he and another activist tried to “wake up” the people of Bangalore about axing of trees – by – what else? – climbing a tree.

“We spent 24 hours on the tree to raise awareness about the issue and gather support.”

Speaking about his other projects, Singh said: “I just travelled across the country to find out what the true cost of electricity is.”

“I also came across a lot of heart-breaking stories where tribals and farmers are getting displaced, forests getting destroyed and animals losing habitats. All this because of our greed for coal,” he said.

On to his upcoming endeavour in Chandrapur, Singh is yet to figure out the logistics of staying on a tree for a month.

“Earlier, I planned to stay on the tree 24X7. But since this is a month-long project, I’m yet to figure out details such as building a washroom in the tree house or climbing down the tree daily,” he said.

So well known is Singh for his efforts that MTV has even made a series of short films on him.