Dharamsala: After the Dalai Lama’s historic decision to devolve political power to an elected leadership in March 2011, Tibetans outside Tibet choose a government in exile with full political powers to PM Dr. Lobsang Sangay. Now this government has completed a year in office but there is no head way to Dharamsala-Beijing talks for the Tibet cause. 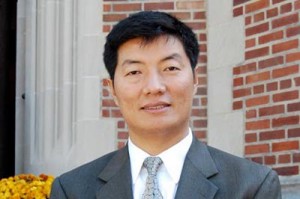 Sangay said ,”We are committed to the Middle-Way Approach and the dialogue process to resolve the Tibet issue on the basis of mutual benefit. The Tibetan Task Force on Negotiations has met twice in the last eight months and will meet again in December to continue the dialogue process with the new Chinese leadership.”

He indicated in the statement issued in Dharamsala that Prominent leader, including the U.S. Secretary of State Hillary Clinton, called on the Chinese government to continue a serious dialogue on the issue of Tibet.

To run a government on its own he said ,” This is a responsibility that we have handled reasonably well so far, thanks to the unity, solidarity, and support from Tibetans in and outside Tibet, and our friends.’

Dr. Sangay said, “I pray for the long life of His Holiness the Dalai Lama. We are profoundly grateful for his continued presence and guidance. Finally, to my fellow Tibetans in and outside Tibet, I want to reiterate the current (parliament) Kashag’s commitment to fulfill our cherished goal of freedom for the Tibetan people, and return of His Holiness the Dalai Lama to Tibet.”

Talking about the self Immolation by Tibetans, he said his leadership transition coincided with a tumultuous period marked by an unprecedented wave of Tibetans self-immolating – the paramount form of protests against China’s occupation of Tibet.

A total of 46 known incidents of self-immolations have occurred in Tibet with all but one occurring since March 2011. While we urge Tibetans to refrain from such drastic forms of protest, we hold the repressive policies of the Chinese government solely responsible for this tragic turn of events.

He stated that the work done by his government in the fields of staff reform, strengthening policy research, development capacity, mobilizing human resources, health, and education has provided relief to the refugees

He said that the Exiled Government is looking ahead for the 2nd Special General Meeting of Tibetans in Dharamsala from September 25-28, 2012. The primary agenda will be to discuss ways and means to deal with the urgent and critical situation in Tibet. Another important upcoming gathering is the Special International Tibet Support Groups Meeting.