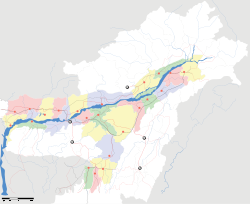 New Delhi: Bharatiya Janata Party (BJP) leader L.K. Advani Wednesday termed the violence in Assam “unprecedented” and said the central government was to blame for it over the influx of Bangladeshi nationals across the porous border.

Initiating a discussion in the Lok Sabha on the Assam violence that has claimed over 70 lives, Advani said the violence was on an “unprecedented scale” and had displacement of over three to four lakh people.

Advani, who has visited relief camps in Kokrajhar, said the people of Assam “have become refugees in their own state,” adding that women he met there were worried they may never be able to return to their homes.

He said that the violence in Assam should not be treated as an ethnic issue, or a communal issue as “the main issue is who is an Indian and who is from outside; this should be recognized.”

He said in Assam there were many Muslims from before, “and it is not an issue with them. But these infiltrators from outside speak Bengali.. the root is the infiltration taking place from Bangladesh for many years”

“It is a problem not just for Assam, but for the whole of India, this should be recognized.”

Advani also said if the scale of violence in Assam had taken place elsewhere in India “then everyone would wake up and take action”.

“Chief Minister Tarun Gogoi has said that Assam is sitting on a volcano. Is the prime minister listening,” he asked.

“The infiltration from Bangladesh is a very serious issue and the centre has to answer for it.”

He referred to the Illegal migrants (Determination by Tribunal) Act, 1983 to say that the apex court had struck down the act in 2005 terming illegal migration as “foreign aggression”

“By not adhering to the Supreme Court direction the government is doing great harm to the country,” Advani said.

“The prime minister’s failure to implement the apex court direction in respect of illegal immigration to the country is a great danger,” Advani said.