Virbhadra is said to have sent in his resignation on Tuesday. 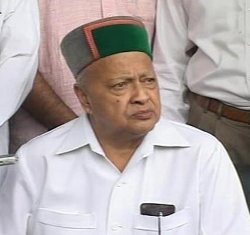 The senior leader is said to be perturbed at being kept out of the Congress screening committee announced by the party that is headed by Delhi chief minister Sheila Dixit to shortlist candidates for the upcoming elections.

Besides Dixit, the five member committee announced for Himachal has party incharge Virender Chaudhary, Vidya Stokes, Kaul Singh and Jitender Singh, an MP from Rajasthan as its members.

Virbhadra Singh has also decided to keep away from an important strategy meeting scheduled to be held here today.

Media sources claimed that Virbhadra has threatened to quit the party.

The veteran leader’s demand for naming of a chief ministerial candidate has not been endorsed by the party.

Earlier, Virbhadra, 78, had to resign from the union cabinet after a trial court here framed graft charges against him and his wife Pratibha Singh.