Shimla: To preserve biodiversity, payment for environment services, green bonus and other norms were being devised under a sharing of benefits concept to enable communities participate and remain connected with conservation programs, top biodiversity authority functionaries stated here. 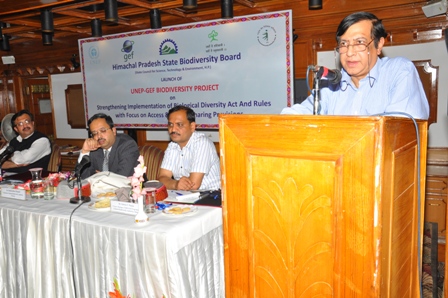 The project was being implemented for conservation, sustainable utilization and sharing of benefits out of the use of biological resources which would set guidelines, manuals and standards for further implementation all over the country in future.

He said that there was a proposal to assimilate all the biodiversity data available in the country and integrate it with the national knowledge mission.

When pointed out the thrust being given to hydropower development in the eco-fragile zones in the Himalayan region including Himachal, which was proving to be a threat to biodiversity, Pisupati said that conservation of biodiversity was not required participation from various government agencies and the community.

Speaking on the occasion chief secretary Sudripta Roy stressed upon the need for conservation, sustainable utilization and sharing of benefits accruing out of the use of biological resources at agro-climatic and ecosystem levels.

This would benefit protectors and conservers at grass root levels, he said.

The project to be implemented jointly by HP State Biodiversity Board and National Biodiversity Authority seeks to develop tools and methodologies with guidelines and frameworks for implementing access and benefit provisions on equity and gender basis.

Member secretary HP Biodiversity Board, Nagin Nanda apprised the gathering about initiatives taken for implementation the Biological Diversity Act, 2002 in the state.