Shimla: Raking up the issue over historical infirmities in apportionment of assets under Punjab Reorganization Act, 1966, chief minister Prem Kumar Dhumal demanded that Shanan hydropower project be transferred to Himachal as it had been erroneously allocated to Punjab. 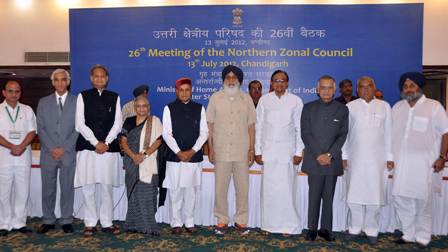 Speaking at the Northern Zonal Council meet presided over by home minister PC Chidambaram at Chandigarh, Dhumal pointed out that ownership of Shanan project at Jogindernagar was a long pending issue that needed to be resolved.

Whereas the project was constructed under an agreement between the government of Punjab and the Raja of Mandi signed in March 3, 1925, but the central government under notifications of apportionment of assets issued had allocated the power house to Punjab on May 1, 1967.

“Transfer of the project to Himachal should be considered at the earliest,” he said.

Other issue raised by the chief minister was about providing connectivity to high altitude and snow bound areas in tribal lands of Kinnaur, Lahaul-Spiti, Bharmaur and Pangi.

The areas makes up for 43 % of the geographical areas of the state and remains cut off from the world for nearly 6 months in a year, he mentioned.

The people trapped in this large zone need regular access for meeting their daily needs as well as to handle emergencies, especially medical and disaster management, said Dhumal while demanding a regular helicopter service to the region on the subsidized fare pattern that is provided to north eastern states.

The chief minister asked for declaring the apple fruit as a special product and import duty on it be raised to protect the interest of hill farmers.

Considering the states demand for a four lane highway from Parwanoo to Shimla, union minister Chidambaram said that National Highway Authority would be asked to look into it on priority basis and draw up a comprehensive plan.