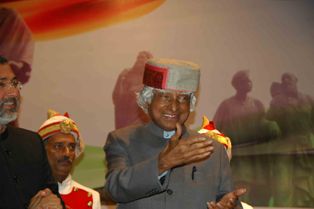 Shimla: To have a nuclear weapon free world universal public pressure should be built, said renowned scientist and former president of India, APJ Abdul Kalam when he put a number that there were about 10,000 live nuclear weapons posing a threat to the world.

Interacting with students after delivering the keynote address at a public colloquium on fundamental duties, Kalam said that nuclear energy is a clean source to harness but the world needed to be free of nuclear weapons of mass destruction.

There are about 10,000 nuclear weapons existing, mainly with the American and Russian blocks and they have signed treaties for reducing these weapons, he said responding to a question about how technological advancement could check the threat posed by weapons of mass destruction.

Evading a question posed by an engineering student about his experience with political parties when he was president, Kalam steering clear of any controversies said, “it is a difficult question to answer.”

Not wanting to disappoint the student and the audience he went on to add, “there are some good people in politics. The need of the hour is to focus on developmental politics.”

Responding to a question by a law student how one could expect justice and good governance in the light of number of scams surfacing in the country, the former president acknowledged, “we are going through difficult times.”

The nation lays its hope on the 600 million strong youth power in the country, the 400 million strong middle class, globalization and the saving habit of every Indian to overcome all difficulties coming in the way of the nation building, he said.

A poser from a class IV student on ‘how to become president’ had the former president stumped.

“A big aim, constant enhancement of knowledge, hard work and perseverance was needed to achieve any big target in life,” is what Kalam managed to muster for an answer.

To another question about how to reconcile scientific temper with the numerous beliefs in a diverse country like India, the former president mentioned the book ‘Biology of Beliefs’ by a leading DNA scientist Bruce Lipton.

He said that in the book Lipton mentions that research was showing that there was scientific basis of beliefs being linked to DNA profiling.

In his address the Kalam said that achieving excellence was not accidental but a continued process where one competed with oneself only.

Speaking about rights and duties, he said environment was a concern for all and one needed to perform ones duty towards conserving it for future generations.

Saying that political freedom having no meaning without economic freedom, he said that the country was in need of a second green revolution if it had to sustain its self sufficiency in food items.

To a girl students question about what inspired him to take to science; Kalam said “as a 10 year old Class V student in a village near Rameshwaram, Tamil Naidu a teacher’s class on how birds fly ignited me.”

“I took up physics as my subject, did aeronautic engineering and later specialized in rocket science,” he said.

Before starting out with the interactive session Kalam asked the children to recite poem “I Will Fly” with him.

Earlier Chief Justice Kurian Joseph said that while everyone had equal rights but one had to regard the rights of others also which mounted to being a true duty.