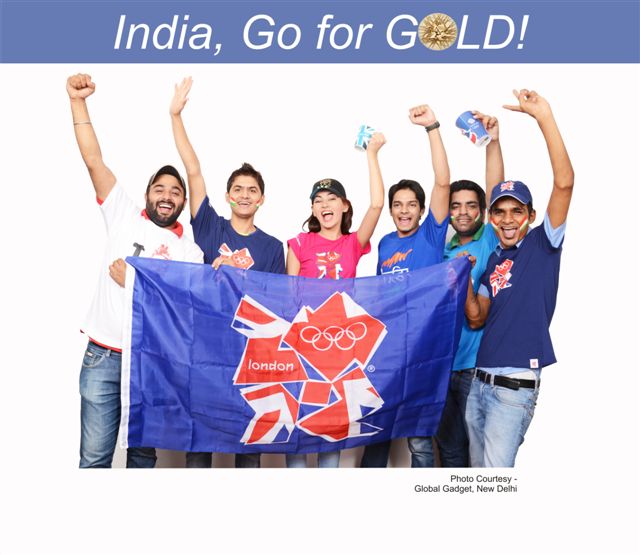 No matter where they live in the world, non-resident Indians, particularly the older generation, will cheer for Indian participants at the London Olympics. Even those born in their countries of residence will follow the medal tally of the Indian teams although they support the teams of their adopted country.

“There are a lot of Indians in the US and the UK who will take keen interest in India’s performance at the Olympics. There may be a lackluster interest from US or UK-born Indians because they have not been visiting the ancestral country and are not exposed much to India except from what they hear from their parents. I foresee a lot of interest from recent Indian arrivals in the US and the UK – a lot of educated young techies,” said Shanti Shah from New Jersey.

“Like most of my British compatriots, I will be supporting the UK team. We have now lived in the UK more than in Kenya and have little sentimental value for India,” said Karam Bharij from Northampton, a Kenya-born Briton who hopes India does better this time, betraying his Indian roots.

Cyprian Fernandes, a former sports correspondent now retired in Australia, wrote: “India is not on my radar as a must watch country. I expect Indians to win one or two medals in shooting where there has been a tradition of Indians doing well. Other than that I have not seen any evidence of medal chances. I am hoping that they will be able to surprise the world as they did at the Commonwealth Games athletics. I will keep an eye through the heats.

“In hockey, it would have to be an upset of world shattering proportions for the Indians to win a medal,” he wrote, adding: “Of course, I will be rooting for Australia, a major sporting power.”

Tushar Shah from South Africa said: “I am sure India will win more medals than Beijing, sending the largest-ever contingent. I don’t think India can get a medal in hockey, I predict they will be in 6-8 position. But I will be very glad if they can prove me wrong.”

A veteran journalist and an author, Shamlal Puri, from London, wrote: “As an NRI I would like to have cheered the Indian contingent. I have lived here well over 40 years, so I owe loyalty to the British too! To be fair, I will cheer the best athletes – wherever they are from – even from Kenya or Tanzania, the countries where I have lived in the past!”

“India’s image has certainly changed after Beijing. It is a sporting nation of note globally in badminton, tennis and shooting. But in the same way as it has turned cricket into a religion, India should also work hard to ensure other sports are not left behind at the cost of promoting cricket and the big money behind it. Indian sports deserve much more attention than just cricket alone. The Indian hockey team is much better and has a golden opportunity to shine. India has bright prospects to win more medals than Beijing,” he went on.

Liladhar Bharadia, a photographer from Nairobi, wrote: “I think India will win a few more gold medals, maybe two or more, at the most, during the London Olympics. I am going to cheer both teams from Kenya and India. Let us hope for more gold medals for both the countries.”

Mervyn Maciel, a British Goan in London, thought India should do well. “As for loyalty – well, you may remember what a former Conservative minister, Norman Tebbit, said whether Indians here would pass ‘the cricket test’. Would they support the team of their host country or the country of their adoption? Having lived here for 40+ years, I naturally want Brits to win – no disloyalty to India though!”

Anil Vidyarthi, director of a printing press in Nairobi, wrote: “As much as I love India, I am a Kenyan through and through when it comes to athletes in long-distance running, they have collected more gold medals than India. I wish the Indian team all the best and hope they will prove that India has come of age in the Olympics. I will be cheering the Kenyan team and then the Indian team.”

Sultan Jessa from Montreal wrote: “I am a Tanzania-born retired Canadian journalist, whose ancestry is from Gujarat. My absolute loyalty is to Canada. So, naturally I will be cheering for Canada all the way. I have always been fascinated by India and I will be cheering for the Indian contingent as well. Unfortunately, India, despite its massive population, has not performed well at the Olympics.

“India’s image has changed by winning three medals at the last Olympics. But India has a very long way to go. I am hoping and praying the Indian contingent will do better this time around. I expect India to win more medals in London than at Beijing; if it does not, it will be a tremendous disappointment. Millions in India and NRIs around the world are depending on India to do its best.”