Shimla: The recent resignation of former Union Minister Virbhadra Singh from being incharge of the campaign committee constituted for the ensuing Vidhan Sabha elections and other party posts has further sharpened the divide within the already factionalised Congress here. 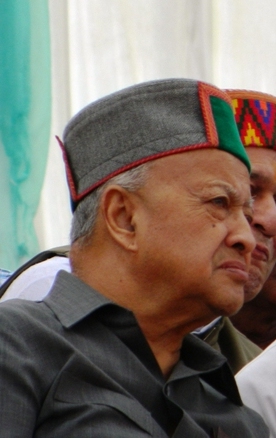 Mr Singh has resigned from the campaign committee because he was not taken in the five member ticket screening committee for short listing the candidates, said the inside party sources.

His arch rivals in the State party including PCC President Kaul Singh Thakur and CLP leader Vidya Stokes have been made the members of a five member committee to be headed by the Delhi Chief Minister Sheila Dixit.

Mr Singh and his supporters have taken a strong offence to this and calling it a humiliation and dishonour to the former Chief Minister.

The veteran leader who is now facing graft charges and had to resign from the Union Ministry because of this has also refused to work under his colleague and Union Minister Anand Sharma who has been made the incharge of party manifesto committee for the coming elections.

Majority of his supporters here are calling these moves as an organised effort on part of the high command to gradually get rid of the old guard who could never seen eye to eye with the party’s top brass in Delhi.

But surprisingly a big section of the PCC here is not perturbed if he is sidelined by the high command for the larger good and for ending factionalism in the State unit.

In the wake of recent unity moves shown by the Bhartiya Janata Party in the elections year, majority Congress leaders here are requesting the high command to end this factionalism plaguing the party and deal sternly with so called “very senior leaders”.

The party cadre is absolutely confused since there are parallel candidates or aspirants on all 68 constituencies of these senior leaders, said the insiders. The factionalism in party is offering power in platter once again to the BJP, they said.

On the other hand Virbhadra Singh’s supporters badly want their leader to form a regional outfit or align with the NCP, Trinamool Congress or Samajwadi Party of Mulayam Singh Yadav to give both the Congress and BJP a tough challenge in the hill State.

But still the neutral and die hard Congressmen here feel that the old hand has become a liability or an asset is to be decided by the central leadership only. The 79 year old leader has still no plans to call it a day, they said.

The BJP which is getting upbeat by the end of factionalism in the organisation is planning to target Singh on his tainted image now and has even threatened to play the audio CD containing his voice in the coming election campaign.

“It is because of this that the smart Congress high command is trying to corner and keep Mr Singh away from the party’s election campaign”. This is the BJP analysis and reasoning of sidelining Singh by the Congress.