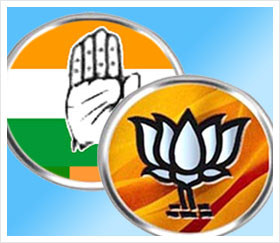 Shimla: Unable to break the bipolarity stranglehold of BJP and Congress in the hill state here, space for flirting with a third front has shrunk as the main political parties consolidate by curbing dissidence and setting their house in order.

Jolted out of their stupor after Communist Party Marxists (CPIM) sprung a surprise win in the Shimla civic elections, a month ago, defeating BJP and relegating Congress to an unconventional third position, high command’s of the two party’s have rubbed it into the cadres that the power pendulum in turn oscillating to the opposition like in Punjab may not happen this time and the ruling party has a fair chance of succeeding in its mission repeat campaign provided dissidence is settled.

“With old guard BJP leader Shanta Kumar coming around, much of the dissidence centered around him seems to have crumbled,” said a party insider.

“Only the odd man like Kushi Ram Balnatha, the MLA from Rohru and MP Rajhan Sushant appear to be left out while the others have made up in the hope of mission repeat succeeding,” he added.

The intense factional feud between Shanta and chief minister PK Dhumal groups has called it truce after drawing the scalp of Rajeev Bindal, who had to resign as health minister.

Putting up a brave face, Bindal defended the party’s decision with, “one cannot be a minister without the party winning the election. And we intend to win again and form a repeat government.”

Dissident BJP MP Rajhan Sushant bids his time for the party has kept him in suspended animation over his disparaging remarks about corruption against the Dhumal government and Balnatha has shot himself in the foot by demanding a leadership change in the state.

Senior congress leader Virbhadra Singh, having been sidelined by the party high command time and again, has chosen to swallow his pride by announcing that defeating the Dhumal government was his foremost objective.

With Congress first having denied his wife Pratibha Singh a ticket from Rohru in bthe October, 2009 by-poll – a seat that Virbhadra vacated on being elected to Lok Sabha from Mandi, and then his son Vikramaditya’s election as president youth congress set aside in January, the former union minister, has been seething with unvented anger.

Not discounting Virbhadra, who has been a five time chief minister from the party since he was handpicked by Indira Gandhi in 1983; there are other claimants like state party president Kaul Singh Thakur, GS Bali and union minister Anand Sharma in the fray as chief ministerial candidates.

Having tasted blood in the Shimla MC election, CPI(M) sent out feelers for cobbling a front to challenge the domain of the main parties but it has yet to gain any strength as BJP and Congress consolidate their positions.