Srinagar: When Omar Abdullah became the youngest chief minister of Jammu and Kashmir at the age of 39 in 2009, his political opponents targeted him for “inexperience and immaturity”. But many now say that precisely because of his “youthfulness and energy”, Omar has been steadily able to reach out and win over the hearts of many a sceptic. 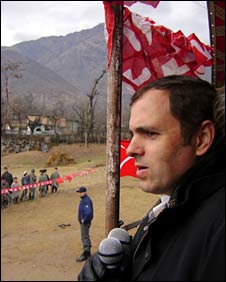 The chief minister today is different from the person he was during the summer unrest of 2010, when he had to take a chopper to visit a hospital seven kilometres away from his residence here. Now, Omar is always on the move. Here today, and near the Line of Control tomorrow, holding the state’s first cabinet meeting outside the twin capitals of Srinagar and Jammu.

He attends his office in the morning, rushes through files to have a personal look at the pace of developmental works including bridges, roads, buildings and healthcare facilities across the state, said an official.

“It is often difficult to keep pace. He even walks at a quicker pace during inspections and spot visits,” said another senior official, who did not want to be named.

At his public durbars, known here as Awami Mulakats, Omar has been meeting dozens of people, listening to their problems, issuing orders on the spot, making queries from the officials concerned and even threatening to sack them if a genuine grievance does not get addressed immediately.

“He does his homework before attending official meetings and can surprise you by asking a question you were not prepared for,” said a senior official.

His opponents have targetted him for being available on micro-blogging site Twitter. But Omar brushed it away with, “Why can’t I use the facility that might be a small but essential window to know what is happening around me.”

The chief minister has more than 100,000 followers on Twitter, which has become quite popular with the Internet-savvy local.

Omar is also paying close attention to his Ganderbal assembly constituency in north Kashmir from where he was elected to the 87-member legislative assembly in 2008.

“The chief minister has visited Ganderbal thrice in the last 10 days, going around seeing development projects, holding meetings and talking to people and party workers,” said a district official in Ganderbal, who also did not want to be named.

People feel Omar Abdullah’s age could turn out to be his biggest political advantage.

“At his age, one often suffers from the disadvantage of being hoodwinked by older people who believe they have age and experience on their side,” said Muzaffar Ahmad, a college professor in Srinagar.

“Yet, if Omar chooses to learn from his experiences and continues to pursue a forward-looking unbeaten track agenda, he can become the people’s darling,” he said.