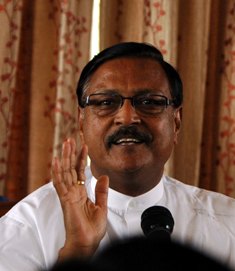 Shimla: Under fire from former union minister Virbhadra Singh over the corruption case filed by the government, BJP hit back today holding that the party would not be cowed down by empty threats and was ready for both a political as well as a legal battle.

Talking to reporters, Satya Pal Jain, BJP legal cell incharge said, “the former union ministers threat of taking the issue before the public mounted to contempt of court, for it was the court that had framed the charges in the corruption case against him.”

“Congress president Sonia Gandhi and Prime Minister Manmohan Singh need to spell out that whether matters of corruption are to be decided before a court of law or before the public,” said Jain while referring to a statement attributed to the former minister about going to the people over the issue.

He added that BJP was not deterred by such empty threats and was ready for battle on all fronts, be it political or legal.

Jain went onto say that Virbhadra was attempting to portray himself as a martyr but in reality he was an accused booked under a Prevention of Corruption Act, legislated by a congress government to check corruption in the country.

Giving the timeline of the case, he refuted charges that BJP had concocted evidence to frame the five time former chief minister.

Jain said that there was no BJP man involved in the whole episode as all the main players were close associates of Virbhadra Singh for even the audio recordings of telephone conversations released to the media in May, 2007 was done by Vijay Singh Mankotia, a former congressman and a former cabinet colleague of Virbhadra Singh.

Though the contentious audio recording was not held as admissible evidence in the case against the former union minister, but it formed the basis of investigation and the issue was taken to court by none other than Virbhadra Singh himself, he said.

With a trial court here framing charges against Virbhadra Singh and his wife Pratibha Singh in the corruption case, two days ago, over allegedly receiving illegal gratification for approving the Gujarat Ambuja cement plant at Dharlaghat and granting time to Mohan Meakin brewery for setting up an effluent treatment plant at Solan, Virbhadra resigned from the union cabinet yesterday.