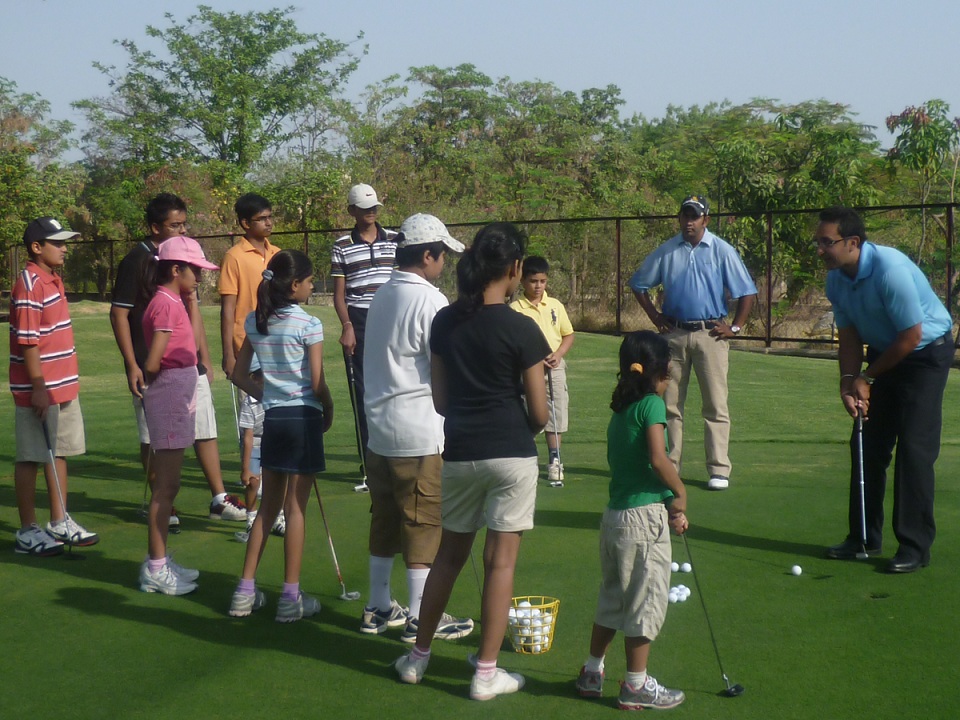 New Delhi: For long, golf has been viewed as a rich man’s sport in India while the all-consuming passion for cricket has somewhat stunted the growth of a discipline that will be making its debut at the 2016 Olympics. The trend is changing with dozens of youngsters walking about the greens of Delhi and elsewhere with a golf kit slung across their shoulders.

Pundits and golfers alike feel a lot has changed over a decade or so. Many academies and camps are available for youngsters to sharpen their skills as parents push their wards to take to a sport that they think helps a person’s all-round development, both physical and mental.

Shubham Jaglan is seen as a mascot of the new-wave golfing community. At seven plus, he is the top-ranked sub-junior and has already emerged as one of the brightest prospects of Indian golf. And where does he come from? Not the greens of Royal Calcutta Club or Delhi Golf Club (DGC), but from the plough fields of Israna village near Panipat, Haryana, in northern India.

Another bright young prospect is 14-year-old girl Ridhima Dilawari. Born in England, she thinks it is natural for her to take to golf after hitting the ball a couple of times. Ridhima is now a regular at the DGC, training relentlessly.

On the roster of the Indian Golf Union (IGU) are 195 golf courses and approximately 100,000 golf club members in the country. Over 50 percent of these courses have 18 holes, including five in Kashmir. More than half the total courses belong to the Indian Army.

Jasjit Singh, a golf teaching pro at the nearly 200-acre DGC that celebrated its centenary this year, feels that good prize money is one of the reasons for the growing popularity of the sport.

“Money is playing a big part in the growth of golf in the country. It has opened a great career option for young golfers and they realise they can make a living out of it,” said Jasjit.

Jasjit, who is a certified Class A trainer, said it was wrong to categorise golf as an expensive sport.

“It is not so expensive to play golf, there are many facilities that have the provision of pay and play and they don’t charge much. No sport is cheap, golf gear is actually less expensive than a cricket kit,” insists Jasjit.

Anirban Lahiri, who turned professional just four years ago and has already won two Asian titles, also feels that golf over the years has grown phenomenally and is heading in the right direction.

“Over the last decade or so, golf has grown phenomenally. In my junior level days there were 10-20 kids in my age-group. Now every group has 60-80 kids and they have junior tours; it’s a good sign for India,” said Lahiri.

Lahiri, who along with Gaganjeet Bhullar was part of the Indian national team that won the team silver medal at the 2006 Doha Asian Games, gives credit to the PGTI and IGU for a stellar job in promoting the sport.

“PGTI and IGU have done a great job, giving a lot of professional training to budding youngsters. There are numerous junior programmes and a lot of promotion has gone in at the junior level. Golf has become a lot more accessible now,” he said.

Both Jasjit and Lahiri share the view that more needs to be done to make golf more popular.

“The facilities here need to be upgraded. In comparison to some of the other countries we are far behind. We lack the latest technology and the government needs to promote the game. It should not be left just to the corporates,” said Jasjit.

Lahiri, however, feels that golf remains elitist and more money needs to be ploughed in at the amateur and junior levels if the sport has to have a rapid growth.

“Things are changing, but golf still remains an elitist sport. At the amateur and junior level more money needs to be pumped in for a quicker growth of the sport.”

There is no doubt the game is finding new followers in India among all age groups, both men and women, who play not so much to compete but who find the singular nature of the game and its backdrop of natural surroundings a great stress reliever.

“As a middle-aged beginner I find golf a huge stress buster and addictive,” says Anasuya Gupta, CMD of the Cico Group, who took to golf late after her son Aviroop picked up the game at St. Andrews, the home of golf, in Scotland.

“I would like to play the game regularly but golf club memberships are mostly closed or have a decade long waiting time, which I find very restrictive. I wish they would open memberships to new enthusiasts so that people like me get an opportunity to play as often as I wish,” she said.