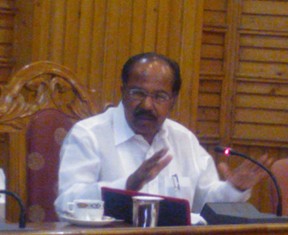 Shimla: With the second parliamentary select committee having cleared the passage of Companies Bill, 2011; after obtaining a cabinet nod at the earliest it would be placed before parliament during the upcoming monsoon session, corporate affairs minister M Veerappa Moily stated here today.

Interacting with the media, the minister said that as soon the bill gets to him which at present is with the Speaker, Lok Sabha office; it would be taken before the union cabinet at the earliest.

Defending the long overdue bill, Moily said that the current Companies Act 1956 had been amended 26 times and there was a need to overhaul the whole company law.

Fiscal reforms had to keep pace with process reforms and the new company bill would fill the gap, he said.

The bill could not go through parliament last time as the opposition had stalled parliament, he said. It was referred to a select committee of parliament for a second time in which senior BJP leader Yashwant Sinha was also a member, he added.

After incorporating the minor changes suggested, the select committee has cleared it, said the minister who was here to attend a Comptroller and Auditor General (CAG) conclave at the Indian Institute of Audit and Accounts in which many senior government functionaries were present.

About breaking the deadlock in the policy paralysis; the minister said that Prime Minister Manmohan Singh had directed senior functionaries to create an environment conducive for unleashing the animal spirits of enterprise to revive the economy.

He said that fundamentals of the economy were strong corrective steps, about concerns expressed in some quarters about declining foreign direct investment (FDI) and foreign institutional investments (FII), and about retrospective tax issues such as the Vodaphone case, were being taken.

He said that disparity in the prevailing diesel and petrol prices causing the subsidy bill to mount was also being addressed.

Virbhadra will come out clean

“No court has convicted Virbhadra Singh,” he said, “his resignation from the union cabinet in the aftermath of the court case should be appreciated.”

“Virbhadra is a fighter and will fight his way back,” he added.

He said that Congress would be back in power in Himachal Pradesh after the elections are held later in the year.

However about Virbhadra being named the chief ministerial candidate, the union minister said, “it was for the party to decide about the leadership issue in any state and I’m not competent or authorized to speak on it.”