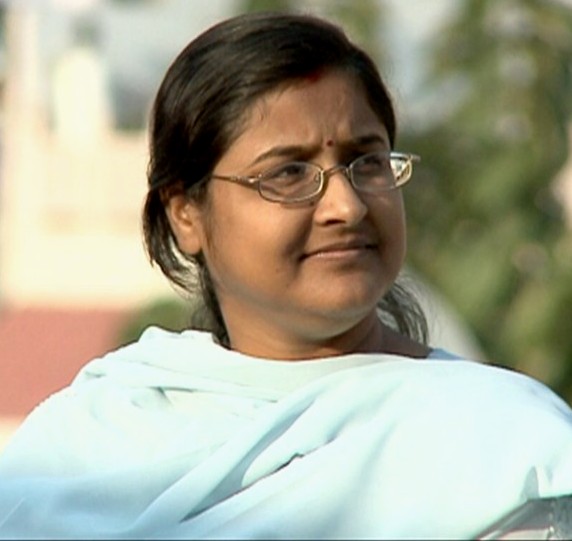 She has filed nearly a dozen PILs on her own. Her daughter (16 years old) has recently questioned the actions and talks of Nirmal Baba, in the court of law [link]. A freelance journalist by profession and a social activist by nature, Nutan Thakur is one of the few people in our society who likes to ‘walk the talk’. For her, change is a long process that requires consistent efforts..

Based in Lucknow, Nutan spends her time between court(s), public administration offices, and family. Every now and then she keeps visiting the court filing cases against the corrupt politicians and government employees. Having done her PhD on Munshi Premchand and D.Litt on Ageya, a well known Hindi writer, she is well aware of the responsibilities of an educated Indian and does her level best to bring about a positive change in the world around her.

Tarun Goel had a brief conversation with the social activist.

The court cases and the Public Interest Litigations (PIL), when did all this start?

Yes, it is true that I often go to the law courts, filing one Public Interest Litigation (PIL) or another. All these PILs are for different causes that would presumably benefit the society. The purpose is to contribute positively to the cause of making a better society around us and I am just doing my bit. My husband, Amitabh Thakur is an IPS officer and his study leave case ignited the fire inside me. An IPS officer willing to study further was not allowed to do so because of political reasons. They thought we would fear losing the job and keep mum but that did not happen. I and my husband decided to stand up for what was right and just.

My husband is fiercely independent and that makes his life (and mine) somewhat difficult and different from his peers. Amitabh was even denied study leave when he wanted to study at IIM Lucknow. He started his legal fight through the use of RTIS and Court cases. Soon-after, I jumped in and started filing PILs.

Tell us about the ‘outcome’ of your PILs. How often, and how well do you see a PIL hitting the mark?

Many of my PILs have yielded good results.

My PIL about the delay in deciding over the Arms license application and my PIL about the Development Authorities harassing people in the name of illegal colonies have been helpful to many needy people. But much more important would be my message that let all of us keep our hopes intact and let all of us believe in ourselves.

I must say it is not that difficult to redeem faith in oneself. Just start thinking that way. I think if I can do so many things, everyone else can.

In one of the PIL about the vacancy in UP Hindi Sansthan, the post of the Chairman and the Director were immediately filled, thus paving way for proper development of Hindi. In another PIL, a very large number of people living in so-called unauthorized houses shall soon possibly get it legalized.

The point is simple, this is our world, our country, our freedom and we do not need anyone else to stand up and fight for us. We just need to redefine our definition of Nationality. Stand up and fight because our kids should not suffer because of our inability to act. The government in Uttar Pradesh is corrupt, and same holds true for most of the states of India. As long as we do not ask questions and let our fears overpower our ability to think and act, India will not shine.

Family responsibilities keep people from even the most righteous daring acts. You too have a family. How do you strike a balance?

I know that I am fighting against the government in one of the most corrupt states of our nation. However, I do not feel scared. Much of the credit for this goes to my husband who always provides me a lot of courage and enthusiasm.

I believe that the more you fear someone, the more they frighten you.

My husband has very different yardsticks and thoughts vis-a-vis the common people. He is very simple in his outlook and yet is quite concerned about the society. His values initially made me feel a bit difficult but now I have almost completely adjusted to this. We have taught the same to our kids; stand up for what is rightfully yours.

Silence is not always golden.

Our children Tanaya (16 years- class XII) and Aditya (13 years- Class X) wanted to file an FIR against Nirmal Baba because we discussed the matter and decided that they might go ahead. We all believe in actions and my husband is the driving force behind our actions.

You are an active Facebook user. Social Networking websites – do they help?

Certainly, they do. Facebook, Twitter, and other social networking sites are wonderful tools – the real social media. They spread your message far and wide. Within a day hundreds of people know about something good or bad the government has done. People must realize the importance of these tools.

I find many people using RTI very purposely, to a very good extent. I am more than satisfied with the proper use of RTI. I must say everything has its pros and cons but if we see in its totality, RTI is proving to be one of the wonder-drugs for India and its people. We must encourage more and more use of RTI for a better India.

An average Indian youngster works in an office from 10am-4pm and spends up to 2 hours daily on the road (or train). How do you think this person can fight against the monster of corruption?

Yes, that person can fight corruption if he really decides for that. It will need a lot of time, a lot of patience and few sacrifices.

Corrupt officials are very fearful also and their fear will help us move forwards, as a whole, as a nation. But still the need of the hour is that everyone must fight corruption in one’s own way, to whatever extent they can.

From my experience, I can say that it is not all that difficult. The moment someone stands before them and tell them about their corrupt practices, many of these corrupt babus mend their ways very fast. Hence, let us all join hands in this fight for a corruption-free society.

The only thing I will say is that I genuinely believe that each of us can serve the society in some important way, in case we decide to do so. It is not difficult.

Let us all extend our hands.

Recently, they have filed an FIR I and Amit filed a PIL against BCCI [link] because they are violating many laws/rules and are using all the privileges and patronage of the Government without being accountable and responsible to the Government or the Public

Nutan has written “Maun se Mukhar Tak”, a research based Hindi book which is about the perception and views of various Hindi litterateurs on Gender bias (Stree Vimarsh). Recently, she finished writing the much awaited book on her husband titled ‘Amitabh Thakur Study Leave case,’ which deals mostly with the bitter-sweet experiences of the activist-IPS couple.

Nutan Thakur is indeed an empowered Indian – well aware of her rights, and duties.