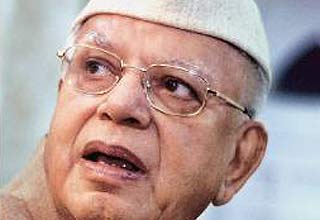 Dehradun : Following the directives of the Delhi High Court to inform it whether he was willing to give his blood sample voluntary or police force be used within two days, there is an eerie silence at the Forest research Institute-located house of the veteran Congress leader, Narain Dutt Tiwari.

Visitors are being turned around by the special security at the residence of the former chief minister of Uttar Pradesh and Uttarakhand and his personal staff and nephew Manish Tewari, who has suddenly taken charge of affairs at the residence, are tight-lipped about what the 87-year-old Congress leader intends doing.

Though sources close to Tiwari claimed that the veteran Congressman was in touch with his lawyers in Delhi and it was in all probability that a revision petition would be filed in special bench of the apex court. However, the former chief minister is not willing to come on record as to what he intends doing.

The High Court gave the directions on an application filed by Rohit Shekhar, who claims that Tiwari is his biological father and has been pursuing the paternity suit for almost four years now. The blood sample will be taken for conducting DNA test for the purpose.

Showing that its intent was seriousness and it meant business, as Tewari had evaded the matter on one pretext or another for quite some time now, the High Court also directed the Hyderabad-based Centre for DNA Fingerprinting and Diagnostics to send the requisite kits for the DNA test to the registrar of the Court.

Meanwhile there are talks in political circles here that the paternity suit was also in a way responsible for the unceremonious exit of Sanjay Joshi, the personal officer of Tewari who was told to leave the House when he went there a couple of days back, on the plea that he has been sacked.

It is being said that family members close to the veteran Congress leader feel that the paternity suit had not been followed properly because of which things had come to this stage where the High Court had taken the serious stand that either Tewari give his blood same voluntarily or police force would be used to get it.

In fact there are even talks of the serious ramifications that may follow should the DNA sample prove what Rohit Shekhar is saying, though he has gone on record to say that he was not pursuing the paternity suit for monetary purposes.