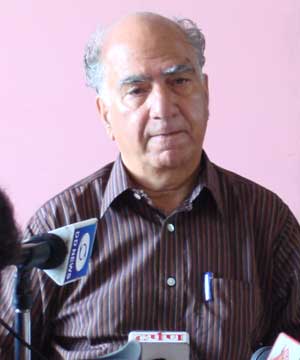 Shimla: There seems to be no end to the bickering in Himachal Pradesh’s ruling Bharatiya Janata Party (BJP) despite party president Nitin Gadkari holding a meeting to reunite the two warring leaders — Chief Minister Prem Kumar Dhumal and party vice president Shanta Kumar — in the run-up to the assembly elections.

State BJP leaders, who did not want to be named, said Shanta Kumar had categorically told Gadkari during the meeting of the core group of leaders held in Nahan May 9 that he would not attend the state executive meetings till steps were taken to stem corruption within the party.

In keeping with this two-year stand, Shanta Kumar, a former chief minister, did not turn up for the party meeting in Shimla Tuesday.

“Shanta is not keen to be associated with the state party affairs till the issues raised by him are addressed appropriately. He is the most senior leader and doesn’t want to be a silent spectator in the meetings,” a confidant said.

Sources said that Gadkari had tried to keep both Shanta Kumar and Dhumal in good humour by saying that the latter had to adhere to the advice of the former.

Clearly reposing faith in Dhumal, he also said there was need for the party to introspect and take some hard steps.

Party insiders said Shanta Kumar had again raked up the issue of senior leaders like Maheshwar Singh, a four-time former MP who deserted the party in February and floated a new political front.

“In clear terms, he told Gadkari that the party’s ‘Mission Repeat’ (repeating the government in the next assembly polls) is not possible without bringing back all the rebels into the party. Their contribution for the party can’t be ignored,” he said.

At the meeting, Shanta Kumar also expressed annoyance over the failure of two central leaders — Nadda, a former Himachal minister, and Shyam Jaju, co-in charge of the state’s party affairs — to look into the allegations of corruption raised by the rebels. The rebels, Maheshwar Singh, former speaker of assembly Radha Raman Shastri and two former ministers Shyama Sharma and Mohinder Sofat, were eventually forced to resign from the party.

At the public rally in Nahan after the party’s meeting, Shanta Kumar, who attended a party’s function for the first time in two years, had categorically said the BJP must do some introspection and take some hard steps before going to the polls.

Last month, a bitter Shanta Kumar had told reporters in Dharamsala: “Some of them (party leaders) are living in the intoxication of power; others who have accumulated a lot of wealth are least bothered about others. The government should go for some drastic steps to check corruption.”

“Without a strong cleansing operation on the pattern of the neighbouring state (Punjab) where four ministers were removed (before the assembly polls), the party is not going to return to power in the next election,” he added.

Himachal Pradesh is likely to go to the polls for its 68 assembly seats in October.