Dehradun : The residence of former Uttarakhand chief minister and Andhra governor N D Tiwari, located at the Forest Research Institute premises here, wears a desolate look following the recent orders of the apex court that enough was enough and the veteran Congress leader should give his blood sample for an DNA test.

It may be recalled that Rohit Shekhar had knocked on the doors of the judiciary claiming that Narain Dutt Tiwari is his biological father. 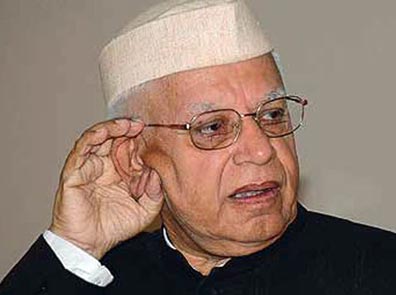 Finally Tewari had been asked to give his blood sample for conducting an DNA test but the veteran leader had dithered on the issue.

However, on Tuesday a bench of the Supreme Court comprising Justice Aftab Alam and Justice C K Prasad made it clear that enough was enough and Tiwari should give his blood sample.

Tiwari had gone to the apex court against the orders of the High Court which had directed the Congress leader to give his blood sample.

Following the directives of the apex court, the hangers around that one could see at the residence of Tiwari are suddenly conspicuous by their absence.

There are obvious fears that the DNA test may finally reveal a fact that the veteran Congress leader was not wanting to become public and hence the withdrawal of the hangers on.

In fact a section of Congressmen here claimed that Tiwari still maintains some clout in Uttarakhand and Uttar Pradesh, both the states where he was chief minister and also in Delhi where Congress leaders still hold him in esteem.

It is because of this that hangers on could be seen at his residence here, so that they could get Tiwari yo pull the required strings.

Though the Congress high command had kept Tiwari at a distance during the Uttarakhand Vidhan Sabha elections, but the former chief minister had managed to get the party tickets for his nephew and his private secretary.

It is another matter that both of them lost despite the fact that Tewari had campaigned for them.

Meanwhile Rohit Shekhar according to reports said that he wanted to only know the reality about his biological father, because of which he had filed the legal case way back in 2007 and it was not for economical reasons. However, there are certain people close to Tiwari who were creating problems in the issue, he alleged.

For the veteran Congress leader, who had to quit his gubernatorial assignment in Andhra Pradesh following a sting operation and a television channel showing a person in bed with three women in a room claiming to be that of governor house in Andhra, it will be another setback should the DNA test also go against him.