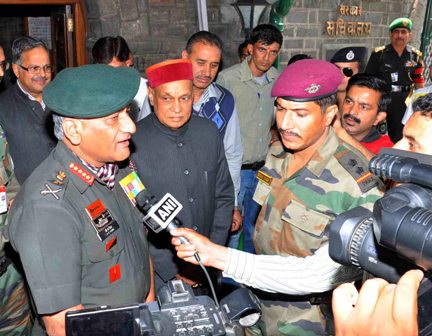 Shimla: With controversy over control of Annadale ground figuring in the talks between chief minister Prem Kumar Dhumal and army chief VK Singh, the general later let reporters know that a mutually acceptable solution to the issue would be found.

On a farewell courtesy call before Gen Singh retires this month various issues figured in the morning meeting on Tuesday.

About Annadale the chief later told select media persons, “the issue was discussed and I’m sure a mutually acceptable solution would be arrived at.”

On other matters discussed at the meeting, chief minister Dhumal raised the issue of strategic rail track to Leh, construction of Rohtang tunnel and relocation of a Dogra regiment from Faizabad to Una, a government spokesman said.

“The chief minister also sought setting up of more canteen store departments (CSD) for the large number of ex-servicemen in the state,” said the spokesman.

Differences between the army and the civil administration prevail over control of Annadale ground that virtually has remained under army control since World War II.

With the government keen to set up a sporting facility at Annadale, the army and the state authorities have been at loggerheads over control of the ground.