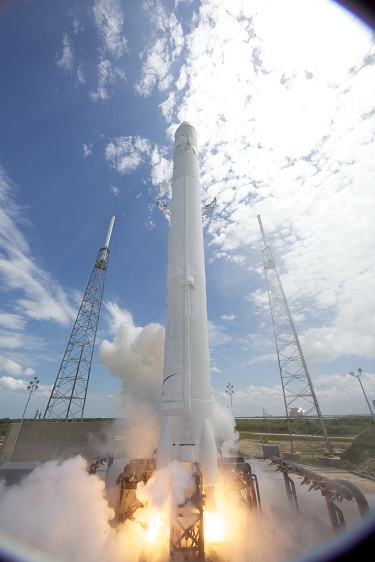 Washington: Private American spaceflight company SpaceX Tuesday launched an unmanned capsule to the International Space Station, initiating the first flight of a commercial and private spacecraft to the orbiting outpost.

On board the California-based company’s own Falcon 9 rocket, the Dragon capsule rocketed into the sky from Cape Canaveral Air Force Station in Florida, Xinhua reported.

“Three, two, one and launch of the SpaceX Falcon 9 rocket, as NASA turns to the private sector to resupply the International Space Station,” said NASA commentator George Diller as the spacecraft blasted off at 3.44 a.m.

The test flight was originally scheduled for April 30, but has been delayed several times due to technical glitches and checks of the spacecraft’s flight software.

If the mission goes well, the ship will be the first operated by a private company, rather than a government, to send supplies to the space station.

However, SpaceX has cautioned that the attempt was risky.

“Demonstration launches are conducted to determine potential issues so that they might be addressed and – by their very nature – carry a significant risk,” SpaceX said in a statement.

“If any aspect of the mission is not successful, SpaceX will learn from the experience and try again,” the company said.

Phil McAlister, NASA’s acting director of Commercial Spaceflight Development, said: “This is a test flight. NASA views test flights primarily as learning opportunities. If it gets us in a better posture to fly next time, that is a good thing.”

The bell-shaped Dragon capsule is 19 feet tall and 12 feet across. It carries more than 450 kg of cargo, mostly food and clothing.

The Dragon will reach the space station Thursday and undergo a series of orbital manoeuvres and equipment checks to make sure the craft can be controlled.

“These are the requirements that must be achieved before the ‘go’ is given to do the final approach,” said Alan Lindenmoyer, manager of NASA’s Commercial Crew and Cargo Program.

If it passes the tests, NASA will give the go-ahead for the final approach Friday, when astronauts Donald Pettit and Andre Kuipers will use the space station’s robotic arm to grab the Dragon and pull it to a docking port.

The vehicle is scheduled to stay at the outpost for about two weeks. Then it will head back to Earth, where it will re-enter the atmosphere and splash down off the coast of California.

The Dragon can also bring back space station experiments and old equipment, as the NASA space shuttles did.

The Russian Soyuz vehicles that ferry astronauts have little room to spare.

If the mission is successful, SpaceX would collect a $396 million payment from NASA to develop a cargo ship.

It would also enter a $1.6-billion contract for a dozen cargo flights to the station.

However, if the flight fails, SpaceX would have to repeat the demonstration flight until it succeeds.

SpaceX has so far avoided the early failures that typically accompany a new rocket. The maiden flight in June 2010 was flawless. The second flight was in December 2010, putting into orbit a Dragon capsule that successfully parachuted back to Earth.

Up to now, flights to the space station have always been a government-only affair.

Until their retirement last year, US space shuttles carried most of the gear and many of the astronauts to the orbiting outpost. Since then, US astronauts have had to rely on Russian capsules for rides while European, Japanese and Russian supply ships have been delivering cargo.