Shimla: Normal life was hit across the state in response to a Bharat Band call given by National Democratic Alliance and Left parties evoked a strong response with shopkeepers keeping off business and public transport suspending services for most part of the day.

Communist Party of India (Marxists) workers flagged down the Shimla-Kalka train and raised blockades on roads while Chief Minister Prem Kumar Dhumal walked to office in solidarity support of the bandh call against the recent hike in petrol prices.

“In protest of the massive petrol price hike, I chose to walk to office,” said Dhumal.

The bandh was complete in the hill resort as the about 6000 shops and commercial establishments did not open for businesses till around 2 p.m. 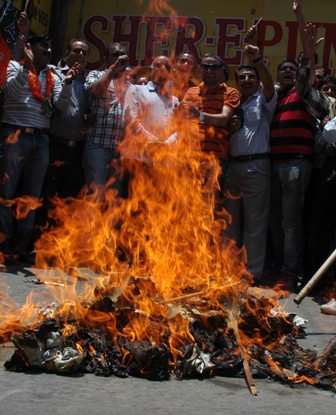 Tourists out for a summer break were deprived of accessing eateries, going sightseeing and shopping for earlier part of the day.

Life for half a day was also hit in other townships of the state which include Solan, Dharamsala, Kangra, Palampur, Mandi, Rampur, Theog, Kullu, Una, Hamirpur and Bilaspur.

No violence was reported from anywhere in the state. “Shutdown to our bandh call was complete,” said Ashok Kapatia, BJP spokesperson.

Dhumal demanded an immediate roll back of the price hike saying, frequent and massive hike in petrol prices was further burdening the common man and causing prices of essential goods to also rise alarmingly.