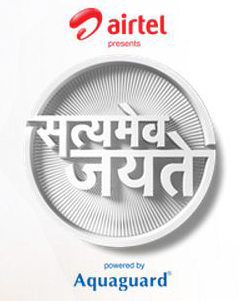 Mumbai/New Delhi: The much-awaited television show ‘Sataymev Jayate’ has turned out to be another masterstroke from Aamir Khan. The star evoked a range of emotions as he dealt with the sensitive topic of female feticide and its repercussion on the society in the first episode of his maiden TV venture that went on air Sunday.

There were many moist eyes among those in the TV audiences and many more at homes and offices across India as people tuned in to watch the programme, which Aamir said in his ads he wanted to replicate the phenomena created by the epic ‘Mahabharat’ and ‘Ramayana’ teleserials of yore on Sunday mornings.

‘My ammi (mother) was not here, she was in Pune. She liked the show and messaged, ‘Dil pe lag gayi aur baat ban gayi’. It was very overwhelming that she liked the show. I had tears in my eyes. I am really happy,’ Aamir told reporters here Sunday.

‘I was watching the show with my wife,the core team of the show and son Azad. I don’t know how much Azad understood. I had tears in my eyes. I got good response for the show through industry people, various people, twitter reactions. Even our website crashed because of the traffic,’ added the 44-year-old.

Equipped with well-researched instances and case studies, Aamir’s one-and-a-half hour programme was simultaneously beamed on Star Plus and Doordarshan, a first.

Not only that, in a bid to reach out to everyone, special screenings of the show were held in some villages in Maharashtra, Uttar Pradesh and Gujarat where people do not have access to televison.

The maiden episode highlighted how unethical medical practitioners are hand in glove with families wanting to kill the female unborn baby.

Aamir also dispelled the perception among people that female foeticide is practised by rural people or those living in small towns with Mitu Khurana, a Delhi-based doctor being asked by her orthopaedic surgeon husband and in-laws to abort her girl twins just after 20 weeks of conceiving. Finally, she left home to save her twin daughters from death.

Viewers have given the thumbs up to ‘Satyamev Jayate’, saying it is a gutsy, hard-hitting and sensible programme that strikes an emotional chord with the audiences.

‘What Aamir Khan is doing is fantastic. He has shown all aspects of the issue – the minuses and what could be done to prevent it. He has not left it hanging in the middle. He has shown the total picture. He has done it in a way that it will touch the hearts of people,’ said Ranjita, a Delhi-based counselor.

The show’s success can be estimated from the fact that it occupied the ‘top five trends’ on the social networking site Twitter. Even before Aamir could wrap up the episode, 2,254 tweets were notched up.

If that’s not enough, ‘Satyamev Jayate’ received such an overwhelming response that its official site crashed within minutes of the end of his programme due to huge traffic.

In terms of business too, Aamir has managed to draw big brands and loads of moolah to sponsor a reality show that puts the spotlight on the invisible people in the country. Airtel is the title sponsor, while Aquaguard Axis Bank, Berger Paints, Skoda, Coca-Cola, Johnson & Johnson and Dixcy Textiles paying crores for the show.