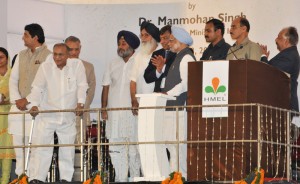 Considered one the biggest investments in Punjab since independence, the refinery is located at Phullokari village near Bathinda town in southwest Punjab, 250 km from here.

The prime minister said the refinery will usher new development in Punjab.

‘Our government has been monitoring the project since 2004 and I am happy that it has been completed in record time,’ he said.

Speaking at the inauguration ceremony, Mittal also said that it had been made operational in record time.

‘This refinery will establish Punjab as a petro-hub in the region. It will serve the requirements of states in north India,’ Mittal said.

Punjab Chief Minister Parkash Singh Badal said that the setting up of the refinery was a ‘historic day for Punjab’.

‘After exporting wheat and paddy to other states, Punjab will now be sending petrol and petroleum products through this refinery,’ Badal said.

The project’s foundation stone was laid by the then prime minister Atal Bihari Vajpayee in 1998. However, it was stalled when the Congress government led by Amarinder Singh came to power in Punjab in 2002 and objected to the terms and conditions of the project.

The project was revived in 2008 after the Parkash Singh Badal government returned to power in Punjab in 2007.

The refinery, construction of which began in 2008, had started refining mineral oil in August 2011.

A crude oil terminal and a 1,117-km cross-country pipeline were set up in a record time of 27 months to make the refinery operational.