New Delhi/Visakhapatnam: Prime Minister Manmohan Singh Wednesday called a media report on two key army units moving closer to the capital in January without prior notice to the government as “alarmist” and said it should not be taken at face value. 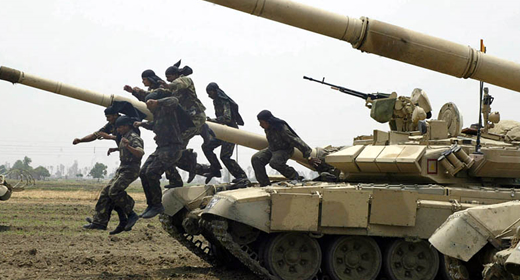 Defence Minister A.K. Antony also vehemently denied the Indian Express report as “baseless” and added there was no doubt about the patriotism of the armed forces.

“Well, the defence ministry has clarified the position. These are alarmist reports. These should not be taken at face value,” Manmohan Singh said on the sidelines of the Padma awards function at Rashtrapati Bhavan here.

He also spoke on the reported tussle between the government and army chief Gen. V.K. Singh.

“The army chief’s office is an exalted office. All of us have an obligation to do nothing that lowers its dignity,” he said, when asked if there was unease between the government and the army chief.

The Express said in a front page report Wednesday that the Hisar-based Mechanised Infantry and elements from the airborne 50 Para Brigade in Agra had moved towards the capital in January.

It said the movement took place on the night of Jan 16, without following the standard operating procedure of informing the defence ministry in advance.

The report said since this happened around the time when Gen. Singh was waging a judicial battle against the government over his age row, it created unease and suspicion in Delhi.

In Visakhapatnam, where Antony had gone to formally induct a nuclear-powered submarine, the minister clarified that the report was “baseless”.

“(It is ) absolutely baseless,” he said. He also said he had “no doubt on the patriotism of the armed forces.

“It is usual, natural activity… nothing unusual, and we are absolutely sure of the patriotism of Indian armed forces,” he added.

Antony also appealed to the media not to “question the patriotism of the soldier, who are dying for the country.”

“The points raised in the report have already been clarified by the army. Such exercises are conducted by the army from time to time,” Kar said on the sidelines of the event to induct the ‘Nerpa’ submarine.

The Express itself quoted Kar as saying: “Such reports are completely baseless and we categorically deny the same.”

Earlier, the Bharatiya Janata Party (BJP) asked the prime minister to inform the nation what exactly happened on Jan 16.

BJP leader Balbir Punj alleged a trust deficit between the government and the army.

“This underlines the ugly reality of the present government… that it is suffering from a trust deficit,” he told reporters in New Delhi.

“Then, it lost the trust of its own coalition partners. Now you have a situation where the cabinet ministers don’t trust each other.

“Latest is that there is huge trust deficit between Indian Army and government and it is a very unprecedented situation.

“The defence minister must quit immediately because of his sheer inefficiency and inaction or the prime minister must sack him, as nothing else can redeem the situation,” he said.