Lord Auckland, the Governor General to India, was accompanied by his two sisters Fanny and Emily. Emily Eden spent her time much in the manner as was expected of the ladies especially as she enjoyed a high social position being the sister of the Governor General.

A keen observer, Emily, recorded her observation in words and sketches and her observations serve a great purpose in analyzing the life during the Raj by her rare insight into the relation between the British masters and the native slaves.

Her journal entry of 25 May, 1839 recording the fete at the Annadale ground and wondered how the British were enjoying at the Annadale “in the face of those high hills” some of which had remained untrodden since the creation:

…and we, 105 Europeans, being surrounded by at least 3,000 mountaineers, who wrapped up in their hill blankets, looked on what we call our polite amusements and bowed to the ground if a European came near them, I sometimes wonder they don’t cut all our heads off, and say nothing more about it.

The insight of this keen observer clearly shows that Hilly people that she calls mountaineers and which are called Paharis by the so-called cultured persons today, held all foreigners in awe.

The only feeling that they had for the Europeans was of respect born of fear perhaps as we were slaves to the British.

Imagining the scene in my mind’s eye I empathize with those helpless persons for whom the burra sahibs and the memsahibs were people from some other planet and deserved all their devotion.

What happened after the freedom of the nation has changed only something.

Instead of those burra sahibs etc. we have some other privileged persons who after usurping the angrez log filled in the vacuum thus created but some of their poor cousins still watch from distance the fun and frolic of the rich and the powerful. 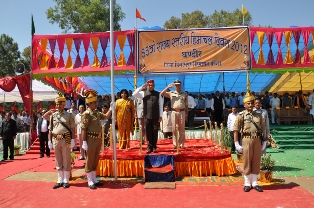 Life goes on and the only thing that changes is the person at the power center. People sitting at the edge still watch and cheer, and bow before the powerful.

How long would it take for the people sitting at the edge to walk up and become a part of the powerful hub?