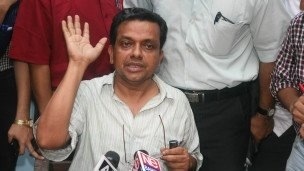 Kolkata: First a ban on certain newspapers and now the arrest of a professor for allegedly circulating a cartoon targeting Chief Minister Mamata Banerjee. People in West Bengal Saturday expressed outrage over the state government’s latest move, with some even wondering if it was “a move towards censorship and partial fascism”.

Venting their anger against Chief Minister Mamata Banerjee for arresting Jadavpur University professor Ambikesh Mahapatra for allegedly circulating a defamatory cartoon, majority of intellectuals and a cross-section of commoners Saturday said they are “scared” by the trend the state government has set.

Mahapatra, a professor of physical chemistry, in his 50s, later claimed he had sent the mail for “pure fun” to his friends.

Sirshendu Mukhopadhyay, a noted writer, termed the incident as “unfortunate”.

“We feel pain when we see such incidents. We feel scared and terrified,” said Mukhopadhyay.

This is not the first time that Banerjee has drawn the ire of the intellectuals and the citizens of the state. Last month, the state government was severely criticised after it passed an order to state-funded libraries to stock only specific eight vernacular newspapers for promoting “free thinking” among readers.

“Whether it’s a ban on newspapers or arrest of a professor of Jadavpur University for circulating cartoons, I personally feel both the decisions were politically incorrect,” said Bhibas Chakrabarty, theatre personality.

“I don’t believe in commenting on each and every issue. But when such kind of incidents happen how can I keep my mouth shut? This incident is unacceptable,” he said.

The common people, however, not only criticised the incident but also felt that the chain of developments was a prelude to a “fascist regime”.

“What is she trying to do? Is she trying to throttle each and every voice of protest? In democracy such things are unacceptable,” said Ramesh Ray, a software engineer.

“This is nothing but a move towards censorship and partial fascism. If she tries to move on the same path the people of the state will not forgive her,” said Rashmita Dutta, a student.

However, some intellectuals supported the professor’s arrest.

“The material which was circulated was not a cartoon. It was a photograph of three individuals which was used to spread malicious and slanderous campaign. I support the arrest,” said noted painter Shuvaprasana.

“I won’t comment on the technicalities of the issue, but I personally feel that Mamata should be given more time so that she can perform,” said Jogen Chowdhury, another famed painter.