Dehradun : Fears have been expressed by the Narcotics control Bureau that opium produced from clandestinely grown poppy plants in the state was either being smuggled to Punjab to meet the requirement of opium addicts or to Nepal where it is converted into heroin for the international drug market. 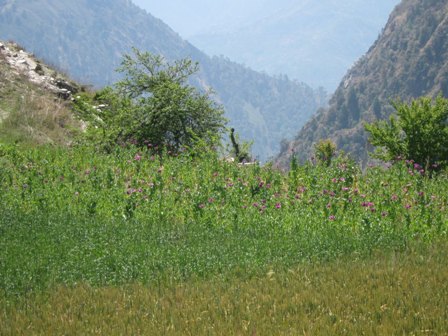 According to figures given by the Bureau about 430 acres of land in Uttarakhand is under the clandestine cultivation of opium poppy plants.

Following this the state government has asked its revenue officials to look into the areas where the plants are being grown and taken effective measures not only to destroy the crops, but ensure that the villagers are asked not to indulge in the cultivation of narcotics.

It may be recalled that the Jaunsar Bawar area of Chakrata in Dehra Dun district was notorious for the cultivation of opium poppy plants.

And though the villagers did not have the necessary permission to cultivate the opium poppy they did so officially without any fear.

In fact so openly was the opium poppy plants cultivates that even in the revenue records the area under opium poppy cultivation was mentioned.

What happened to the cultivation of the opium that was clandestinely produced no one ever tried to figure out and even the state intelligence or police department made no efforts to investigate, but popular reports were that it was smuggled out by a powerful politician of the region of that time.

In fact Kiran Bedi, destroyed the crops grown in large areas, in her capacity as an IPS officer.

Meanwhile the chief secretary has asked the police, excise, forest, revenue and agriculture departments to share information on the clandestine cultivation of narcotics in the state.

The revenue department has been directed that its filed staff tour the interior hinterlands in the higher areas and report where the narcotic plants are being cultivated so that necessary action can be taken..

It has also been decided that awareness camps be held in such areas where opium poppy is being grown as a cash crop, to educate the masses to take to other cash crops and wean them away from cultivating the narcotic plants.